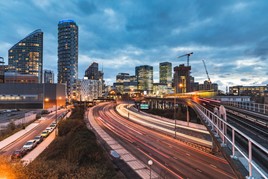 1 Radical changes will be made

Sweeping changes will be made to transport in order to address climate change, according to transport minister Rachel Maclean.

“We are on the cusp of making radical changes in the future of UK transportation, from the cars we drive, to how we get our goods and, more fundamentally, the way that we travel and how we access services,” she said.

The Government has been working on an overarching decarbonisation plan, encompassing all modes of transport, due to be published soon.

It will “set out the path that we’ll take to deliver our net zero objectives, together with our partners across the transport sector,” said Maclean.

Government, industry and academia all need to come together in a revolution that will be “no less historic than the coming of the railways or commercial aviation”, she added.

Maclean also highlighted how Covid-19 has had “a huge impact” on the country and on individuals, and that some of the improvements that need to be made to transport are “within touching distance”.

“People want change, they understand we can’t go back to how things were before,” she said.

“We’ve seen the desire of so many in these last few months to exercise more and travel more sustainably, we have grown accustomed to quiet streets in town centres. So, we now have a great opportunity to lock in and build on those benefits, making lasting changes to the way we travel to help make our country greener and healthier, and to deliver clean economic growth.”

2 Autonomous vehicles to spring a ‘surprise’

Connected and autonomous vehicles will have a significant – but maybe surprising – impact on the UK’s transport system.

Ian Forbes, head of the Government’s Centre for Connected and Autonomous Vehicles, said some of the predictions made a few years ago about when fully automated vehicles would be on the roads were “definitely over-ambitious and over-optimistic”.

“That’s typical of any new, exciting technology,” he added. “I think it’s probably fair to say people are now making overly-pessimistic projections about what might happen with the technology and pace of change.

“I think what’s really important to note is that while all of these kinds of projections are being made in the media, in the background the technology is being developed.

“And it might not develop in entirely the way in which everyone expects, but I fully expect this to have a really big impact on the transport system as people and nations find ways to enable the technology to be used safely.”

Ensuring the UK’s electric vehicle (EV) charging infrastructure is ready for the 2030 ban on the sale of new petrol and diesel cars should be a key priority for the Government.

“There is a big challenge in terms of the production of EVs, but it’s clear the charging networks are going to be essential in delivering that low carbon economy,” said Bridget Rosewell, a commissioner with the National Infrastructure Commission.

“The private sector will step up to that plate – and is already stepping up to the plate – but, as it’s a network challenge, it needs Government support to get that done.

“We’ve got an established refuelling infrastructure for petrol and diesel vehicles that will continue to be around for quite a long time, and we need that EV infrastructure in place to give people the confidence to make the transition.”

Rosewell said the Government needs to provide subsidies to create a national network of rapid charge points by 2022, and to enable Ofgem, DNOs and charge point providers to collaborate to identify investments which are needed.

The technology transfers electricity between the infrastructure and vehicle through either overhead cables or rails embedded in or on top of the road surface, or wirelessly through embedded coils in the road.

Bob Moran, deputy director head of environmental strategy at DfT, said more than half of the UK’s commercial vehicles are less than 18 tonnes and he expects these to be electrified soon.

“As battery costs drop and as performance increases, that sector is really going to be taking off,” he added. “The heaviest road vehicles are a bit more challenging, but the competing technologies are thinning out.

“As we see it now, hydrogen fuel cells, battery electric and possibly electric roads are the contenders. We’ve got to get that technology on to our roads and work with industry, operators and the energy sector as well as academia to work out which is the right solution for the UK.”

5 Urban logistics is ‘most complicated’ area

Urban logistics is probably the most complicated part of the logistics system and arguably the one that’s changing fastest, said David Elvy, head of future of freight strategy at DfT.

“We have to balance land use and what may be significant changes to the way we live in urban environments,” he added. “Decarbonisation and the environment is key, but it’s also about local air quality, noise and congestion.

“We need to think about how we prioritise use of road space, how we manage the noise implications of night-time deliveries, for example, but also increase deliveries to suburban houses rather than into shops and supermarkets.

“How we manage demand for deliveries with space at the kerbside and make that more efficient is absolutely critical.”

6 Transport data is key to innovation

The UK needs to get better at collecting and opening access to transport data in order the boost innovation.

Dr Mike Short, chief scientific advisor at the Department for International Trade, said that without sufficient access to transport data, cities of the future simply cannot be smart.

“We see that innovation and management of our transport systems will depend even more on the availability of data,” he said.

“From what we can see in Europe, there are already lots of initiatives on research and development for 5G corridors and highways. That increased connectivity speed will be an enabler to generate more transport data.

“Making your vehicles and infrastructure more connected might be obvious for transport planners, but as information starts flowing in, we need to make sure there is a way to open it up.”

Short said he would like to see all connected vehicles with sensors being able to share aggregated and anonymised data to road managers and transport planners to help monitor road maintenance, plan routes and even weather conditions.

The Association of Fleet Professionals (AFP) has released a document which aims to ‘define mobility management’ as a subject for wider discussions across the fleet sector.

Domestic car production is under threat in the UK unless more gigafactories are built and battery technology developed, suggests a new report.

The majority of electric car drivers could cover their weekly mileage on a single charge, new research from Tusker suggests.