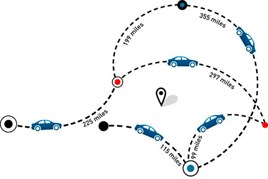 Mitie is rolling out a mileage capture system to 2,000 of its company car drivers.

The system is part of Mitie’s fleet management software which is provided by Jaama. A further 250 drivers use Zenith’s mileage capture system (MyMiles) as they are on an Employee Car Ownership (ECO) scheme.

“Jaama’s system is more generic and enables us to capture private and business mileage.”

Mitie has been using Jaama’s Key2 Vehicle Management software since 2009 and it was a “natural progression” to include the mileage capture portal, according to Patterson.

“Before we had a very manual process,” he says. “This has freed up time.”

Drivers access the system though a landing page on the company intranet and have a unique login and password.

They record the journey details and the reason for the trip.

Mitie did consider a postcode-to-postcode system, verified using Google Maps, but there was an additional cost. Instead an internal audit team and line managers carry out checks.

Patterson would like to move to drivers reimbursing the company at actual fuel cost rather than using Advisory Fuel Rates (AFRs).

“AFRs don’t drive good behaviour,” he says. “If they pay the actual cost of fuel it will be in their interests to buy fuel from the cheapest locations.

“But we need to get drivers used to the system first. We also need good transactional data from fuel cards.”

He thinks that telematics might be the “optimal” solution but “there is an expense to that” and it would be an “emotive subject” for company car drivers.

“There’s not one solution,” he says. “It depends on the culture of the company.”

Ceuta Healthcare switched from spreadsheets to an audited mileage capture system from TMC two years ago.

“The drivers were concerned to start with because they thought it might be cumbersome,” says Helen Bolton, facilities manager at Ceuta Healthcare.

“But it has actually reduced their admin time.”

It has also cut administration for the company as the software includes postcode-to-postcode verification. Previously manual checks were carried out.

TMC manages all driver contact. “Its view is that we shouldn’t be burdened with drivers phoning us,” explains Bolton. “It’s a very attractive part of the contract.”

The other mileage capture systems which Bolton considered did not provide reporting on the trips.

Telematics was also ruled out.

“It doesn’t fit with the culture of our business and it would be difficult to implement,” she says.

TMC’s system has also enabled Ceuta Healthcare to switch from using Advisory Fuel Rates to drivers reimbursing the company for the actual cost of their private fuel.

Drivers who do not submit their mileage claims may have the full cost of the fuel deducted from their salary.