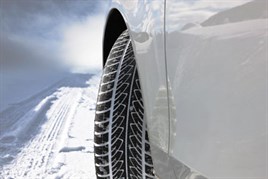 Kwik Fit offers a ‘hotel’ facility that sees it remove, pack, label and store each company car and van’s tyres in its National Distribution Centre in Northamptonshire for £10 per tyre per seasonal change.

Approximately £6 of that cost relates to the transportation of tyres from High Street centres to the National Distribution Centre.

Storage costs have not changed since the service was launched in 2010/11, but are being reviewed ahead of the 2013/14 winter.

ATS Euromaster favours storage in local tyre hotels throughout its network rather than a central facility and charges fleet customers £1 per tyre, per month, for storage.

Timing is crucial. Fit cold weather tyres too early or leave them on too long and tyre wear could be affected.

Availability of cold weather tyres may also be an issue as the UK is still a relatively small cold weather market. Fleet operators may need to place orders well before the winter.

Goodyear Dunlop has already started planning for 2013/14 winter with major input from its fleet customers.

Number of vehicles fitted to: 760 vans

“The tyres give our drivers peace of mind and their performance allows our vehicles to keep moving and make their deliveries in difficult conditions,” says Wright.

AAH stores the tyres itself, and Wright admits that in the winter of 2011/12 the tyres were not removed soon enough.

“Because the winter wasn’t that harsh it definitely knocked the tyres about a bit,” he says. “As soon as the temperature goes above 7°C you need them off.”

Availability hasn’t been an issue.

“We know our requirements as soon as we remove them in the spring and order them.”

Cold weather tyres are not fitted to company cars.

“If the weather makes for unfit driving, the driver has many technological devices to enable them to work without driving,” says Wright.

However, he is investigating all-season tyres for some drivers who need to travel.