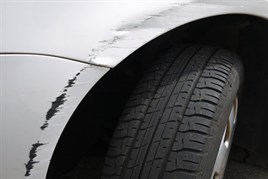 Maxwell says: “There has been a slight decrease in the number of minor incidents that have occurred, but it remains difficult to police and monitor who caused these minor prangs

“For example, many of these incidents occur when vehicles are parked in car parks but it’s impossible to know for definite whether it was a third party who caused them or our employee.

“It’s written into our drivers’ handbook that the member of staff should come and report these incidents to us at the earliest possible opportunity.

“I can then get them sorted out before the time comes for the car to be returned to Lex.”

A capped charge per incident

Europe’s largest vehicle remarketing company also took a decision that charging employees a “capped charge”  would help focus their attention on “proper stewardship” of their vehicle.

Until then, BCA had adopted a standard policy of allowing three incidents before the driver was instructed to undertake a refresher driver training course at their own expense.

Marie Jarrold, car fleet controller at BCA, implemented the policy across the company’s fleet of 400 cars which are used by members of its management team.

She says: “By introducing damage recharging, we feel that we’ve changed the mindset of drivers and hopefully prevented a further two or three incidents occurring.

“At the same time, we recover some of the cost and make the drivers think about and take responsibility for their actions.

“The policy is to charge the driver an excess for damage for any at-fault or ‘unknown’ damage to their vehicle – as they would if it was their own vehicle. This charge is capped at a reasonable level.

“There will always be drivers who think that the charging is unfair but the bottom line is that this is no different to paying an excess charge if it was their own vehicle.”

Fixed payment charged for each incident

With a fleet of 5,000 cars and vans, the Mears Group needed a damage recharge policy that drove down costs while also being fair to employees.

Gloucester-headquartered Mears has more than 13,000 employees and is recognised to be one of Britain’s largest providers of support services.

Its domiciliary division provides home care services to more than 20,000 people nationwide, while it is also one of the country’s largest providers of social housing repair and maintenance services.

In 2008, it opted for a policy of charging each employee driving a vehicle £250 for every own-fault accident.

Fleet manager Jo Hammonds says that the policy has “undoubtedly” reduced the number of collisions.

“It works well for us. The employees know where they stand and as a result appear to take extra care,” he adds.

“In all honesty, I think that it’s necessary to have a robust policy in place when you have a large fleet.”