Planning is key as market reverts to seasonal trends

Hundreds of pounds have been wiped off the value of used cars in the fleet sector with experts predicting the downward trend will continue over summer.

However, nobody anticipates that fleets and leasing companies will have to endure the pain felt during 2008 when the recession began to bite and prices tumbled.

Instead, after more than a year of recovery in used car values, the market is now simply returning to a level where sellers and buyers should expect the peaks and troughs usually seen in a conventional year.

“We have been telling our customers for some time that we expect prices to stabilise in 2010 and for the market to assume a more traditional pattern,” says Tony Gannon, BCA’s communications director.

It means that leasing companies and outright purchase/risk fleets can now start to consider how the seasonal peaks and troughs will coincide with when their cars return to market before setting their residual values.

And it should create stability in leasing fees as contract hire companies set their monthly rates with greater confidence.

Fleets that outright purchase or take the residuals risk and leasing companies will be able to take into consideration the optimum time of year to sell company vehicles to take advantage of the strongest residual values – roughly spring and autumn, coinciding with the new car registration plate change.

However, with extended contracts forcing companies to refresh their fleets and fleet sales expected to be strong this month, many cars will be returning to market this summer – the weakest time for residual values.

Another implication of extended replacement cycles is the fact that older cars are returning to market with higher mileages.

“This will also affect values,” says Gannon. “The average age at remarketing has crept up by around a month.”

Year-on-year values are behind by £117 – the first dip since February last year, underlining the shift in dynamics over the past 8–12 weeks.

“There has been a subtle and seasonal slowing of demand in the used car market over a number of weeks,” explains Gannon.

“There has also been an increase in supply, partly made up of fresh stock, but also including an increasing proportion of re-entered stock.”

Performance against CAP Clean fell for the second month running, from 96.9% to 94.86%, which “reflects the market and CAP’s lack of response to it in May”, says Gannon.

It was a similar picture at Manheim. Its latest figures reveal average wholesale values in the fleet sector fell by 0.6% (£39) to £6,609 in May following a fall of 1.5% in April.

However, Manheim says changes in the mix of fleet vehicles mean that the scale of the fall is perhaps understated as values fell in only six of the 10 segments.

However, the overall increase in values was influenced to a large extent by the model mix in the manufacturer sector where there was an increase in the proportion of compact executive and executive vehicles.

“The decrease in fleet values was much less than expected given the significant fall in conversion rates during May,” says Mike Pilkington, managing director of Manheim Remarketing.

“However, the reduction in demand will inevitably result in lower prices and vendors need to react to the realities of the present marketplace.” 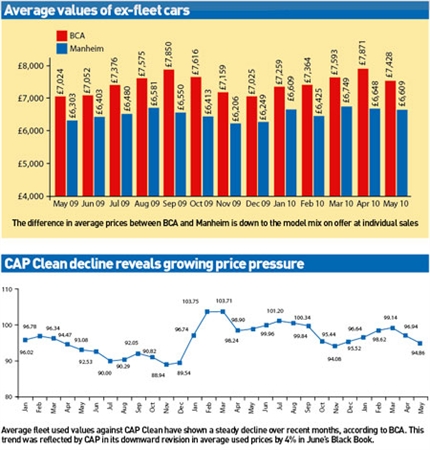 Van values in the fleet sector fell by more than £100 in May, with experts predicting that, like the used car market, it is finally reverting to type.

The 2% fall to £5,073 ended a run of six consecutive ‘record months’, where the average value for fleet and lease vans exceeded £5,000 for four consecutive months having reached that benchmark for the first time in February, according to BCA.

“We are now entering that period of the year where prices have tended to slow,” explains Duncan Ward, BCA’s general manager commercial vehicles.

CAP figures for used LCVs averaged 99.95% across the board, although there was a little
downward pressure from last month in the bigger volume sectors – fleet and lease down one point at 99.79% and dealer part-exchange down four-and-a-half points to 99.71%

Nearly-new LCV CAP values improved by more than a point to 105.73%.