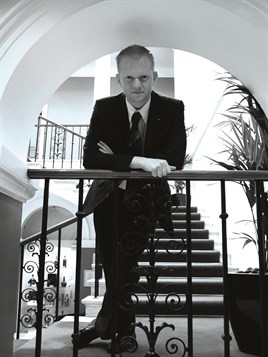 Company directors doubting the positive benefits a dedicated fleet manager can bring should consider the case of Chivas.

The Scotland-based drinks maker decided not to replace its fleet manager when he retired in 2007, but was forced to reversed that decision when costs started to rapidly spiral.

Tristan Campbell took up the reins four years ago and found a fleet that had good fundamental policies in place but a lack of controls and monitoring, particularly on cost.

Like-for-like rental vehicles to replace cars being serviced or repaired, unpaid invoices and an open-choice car policy were among the items sequestering money away from the bottom line.

Campbell, also vice-chairman for ACFO’s Scottish region, modestly describes his influence as being “a few tweaks here and there”, but his impact has been significant. Costs are already down by 12% (a five-figure sum), with more to come as new policies start to take effect.

“We told staff that if their vehicle is off the road they should have a courtesy car first. If one is not available then they go into a pool car,” says Campbell. “If that is unavailable or unsuitable for their job, they can hire a car – but we try to restrict it to 1.6-litre Astras or equivalent.”

The change in policy has had a double-whammy affect – fewer hire days and cheaper rental prices.

How did staff take to the new rules? “It was mostly painless because we explained why we were doing it and showed them the numbers,” Campbell says. “They used to just see their own problem, but now they understand the bigger picture and how they have added to our problem. And it’s not such a big sacrifice.”

Putting greater emphasis on the pool fleet to reduce the need for rental cars means Chivas has a comparatively large pool fleet of 30 vehicles.

They are also used by staff who do not have a company car but who sometimes travel to other sites on business. This replaces the 40p per mile cost of them using their own cars – very few now do.

Campbell took action three years ago to put in place a more efficient pool car fleet as part of a company drive on emissions.

“Three years ago we introduced 10 Honda Civic hybrids with CO2 of 109g/km onto the pool fleet and this year we have replaced another 24 cars, typically 407 and Accords, with Volkswagen Golf Bluemotions, also at 109g/km,” he says. “This has helped reduce the fleet CO2 average.”

Chivas operates as a de-centralised business with its divisions including brands, like Chivas and Absolut, and distributors, like Pernod Ricard, which supply the product to clubs and pubs.
It operates 270 cars, of which 90 are job need (criteria: 10,000 business miles a year), and 50 vans. The heavy trucks/logistics business is subcontracted out.
The Chivas division is the largest part of the business so it takes the lead on fleet matters. Each business operates under one fleet policy, although that didn’t use to be the case.

“There used to be some differences, but we have ironed these out,” Campbell says.
Fleet sits within HR, but is run with a strong bias on financials. That smoothed the way for a number of the “policy tweaks” that Campbell refers to, among them a move to restrict the choice list on cars from an open policy to three brands – Audi, BMW and Volkswagen – and on vans to a solus Vauxhall deal.

Each van is now replaced on a cheaper lease than the previous deal, with the number due for replacement decided at the start of the year to ensure the best discount on a set volume.
The discounts on the cars aren’t as significant – “you have to go for a solus deal for that”, says Campbell. Chivas is, nevertheless, getting better terms from all three manufacturers but it doesn’t load the discount onto the vehicle.

Instead, funding provider Lex Autolease quotes its standard discounts and the end user discount is paid directly to Chivas from the manufacturer. Come the end of the year, Chivas could enjoy a bonus payment upwards of £20,000.

“The benefit from the discount goes to the company rather than the driver,” Campbell says. “Otherwise, we would just offer the driver a cheaper lease and they would simply add more extras to bring the cost back up to their limit.”

Chivas’s fleet policy is packed with similar innovations. Take the re-allocation policy. The bulk of cars are on a four-year/60,000-mile contract, although the Pernod Ricard cars are on four-year/100,000. Base rentals are written on four-year/75,000 which means mileage pooling and contract re-writes are a common occurrence.

As drivers near their mileage allocation, they are allowed to order a new car, but if their existing car has not reached its full term it might be reallocated to a new starter or offered as a used car to a low mileage company car driver.

Written into the fleet policy is a clause that allows staff to take on re- allocated cars for a financial incentive. They are offered a 15% discount on the lease which is used to augment their salary as a non-pensionable taxable supplement.

Around 20 staff have taken this option, most in the past year, and there is a growing waiting list. It has dramatically cut down the number of early terminations.

“It’s a good way for employees to increase their wage without sacrificing too much,” says Campbell. “The cost of the supplement is far less than the cost of the early termination.”

Lex Autolease has been the solus provider of funding for the past year, replacing long-time supplier GE Capital after an eight-month tender. The process was drawn-out, partly because Campbell sought reassurance that lease prices would not rise part way through the contract.
Built into the terms and conditions is an agreement that every element of the lease is broken down into its core components, including road fund licence, vehicle price, maintenance and depreciation.

“Lex can’t alter the management fee by any more than the level of inflation per year,” Campbell says.

It also provides Chivas with an insight report detailing its performance on key indicators such as residuals and SMR compared to other leasing companies.

At quarterly update meetings, Chivas pools data for a sample of cars which it checks against Lex’s monthly rental fee. The two figures should match. If Lex is outside of its agreed tolerance level, it makes up the difference – so far that has never happened.

“That was a key part of the contract and by setting it up at the start it sets the precedence that we won’t accept any nonsense,” says Campbell, adding: “We want an open, up-front and honest relationship with our contract hire company. Not all providers are comfortable with that – some even withdrew from the tender.”

Lex, in addition to agreeing to the terms and being competitive on pricing, also won on its customer service levels. The company has an office in Stirling which enables it to understand issues, particularly concerning geography, that are relevant to the Scottish market.

The Lex Momentum consultancy team is due to visit the business this year to offer recommendations on further cost savings. Among them is likely to be a proposal to switch to a wholelife cost policy, but Campbell is not convinced.

“We looked at this before but the business didn’t want to go for it,” he says. “Wholelife cost could take your eye off the rentals. A vehicle lease could become more expensive and fall out of a band but with wholelife cost it might still remain in that band – you could end up with a fleet of higher rentals.”

And, he adds: “A lot of wholelife cost is already included in the rental cost anyway, and all our mechanisms are set up to control and measure the rentals.”
Campbell’s next big project will be to further reduce the vehicle fleet’s CO2 emissions.

“As a group we use a lot of energy but our aim is to be carbon neutral. Running an efficient fleet is one way,” he says.

Chivas put in place a generous cap of 200g/km for its car fleet in 2008 with a fuel consumption limit of 35mpg. At the time it had already restricted the car choice list, so introducing a prescriptive emissions threshold as well might have been de-motivating for staff.

But the cap will be reduced further, probably in January 2012. Despite the high cap, CO2 emissions are low, down from 170g/km four years ago to 130g/km, primarily thanks to choice of manufacturers.