Remarketing Insight: No surprises as values make buoyant start to 2010

Ex-fleet cars are continuing to perform well in auction halls across the UK, latest figures from Manheim and BCA show.

They reveal that the average price for defleeted stock is now at a similar level to that of last summer, while being about 30% higher year-on-year.

BCA’s Pulse report showed fleet and lease values rose by £234 (3.3%) to £7,259 compared to average used car values which were down in January.

The Society of Motor Auctions says average values should remain strong, but any price growth is likely to be more measured, following the significant recovery in 2009.

It is predicting a shortage of stock – generated by fewer new car retail sales, reduced part-exchange business and fleet-replacement deferments – together with consumer demand for value for money motoring will fuel the market this year.

However, fleet volumes at BCA were up by nearly 17% in January, while part-exchange numbers rose by a substantial 45%, compared to the much shorter trading month of December.

In contrast, nearly-new volumes fell by 2.5% in January, which BCA blames for the drop in overall average value as a result of the model-mix available.

“The continued demand for lower cost motoring is also evident, with the biggest percentage rises seen in the fleet/lease and part-exchange budget sectors.”

Looking at fleet and lease vehicles by sector, the rise in value was felt across the board, says BCA.

Looking at individual product segments within the fleet sector, Manheim’s figures for January reveal some notable increases in values. 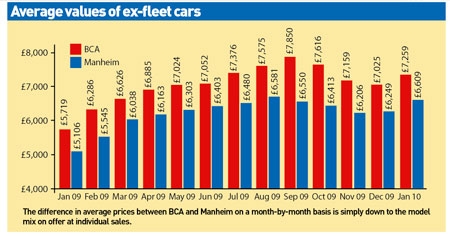 For online retailer Autoquake.com, the annual post Christmas spike in consumer demand was not as pronounced as last year.

From December to January, visits to its website increased by 162% and this year the uplift was 126%.

“A combination of the VAT increase and the poor weather can probably be attributed to the suppression in demand in January,” explains Autoquake.com’s Fredrik Skantze.

“During the worst of the weather, physical attendances at the auctions were affected, but overall attendances remained strong as a much larger than usual number of buyers logged on to Simulcast,” he said.

But Pilkington recognises some familiar patterns returning to the market.

“We expect values to remain strong in February and March before the seasonal softening of the market becomes evident,” he concludes.

Fleet and lease operators with high value stock on their books will have been heartened by the results of a recent sale of prestige, sporting and executive cars at BCA Nottingham.

The sale attracted more than 300 buyers in the auction hall, with a further 216 dealers bidding over the internet.

BCA communications director Tony Gannon said: “This suggests there is plenty of demand for these high-value prestige and executive models.

“It is certainly an encouraging sign for both motor retailers in the premium sector and fleet and lease operators with high value stock on their books.”

Average values for 4x4s are continuing to perform well and it would appear that the cold snap may have influenced demand.

Over the past 12 months, 4x4s have comfortably outperformed the market with percentage increases in average wholesale values considerably higher than in the fleet sector overall.

Values were more settled in April and May, but there was a jump of 11.6% in June when the fleet sector overall increased by only 1.6%.

Values fell in three of the following five months but picked up again at the end of the year.

Despite predictions by some that values had peaked, an increase of 6.3% (£705) in December was followed by a strong 13.9% increase in January, more than double the 5.8% increase in the fleet sector overall, according to Manheim’s figures.

According to BCA, average values for used 4x4 vehicles generally climb as the weather worsens – values increased significantly in March 2009, for example, following the heavy snowfall in February.

“The turnaround in the 4x4 market has been exceptional,” says Tony Gannon, BCA communications director.

“Values reached a low point in July 2008 when several months of high fuel costs, combined with the stuttering economy and uncertainty over proposed vehicle excise duty and the showroom tax saw values fall by more than £2,000 to £6,723.

"There were even rumours that some dealers were refusing to take them in part-exchange.

“But as prices recovered in 2009, 4x4 values were among the first to bounce back.

“They were still exceptional value for money, of course, which undoubtedly attracted a lot of motorists.

However, the heavy snowfalls of January 2010 seem instrumental in pushing values on to new record levels.”