Used values for ex-fleet cars enjoyed huge increases for much of 2009, although they tailed off a little in the final quarter.

However, both companies warn against any expectations that values could perform similarly in 2010.

“January generally brings a further uplift in activity, but sustained price rises over a number of months are unlikely to be repeated simply because the market had fallen so far and needed to recover,” says BCA communications director Tony Gannon.

“A year later we are not in the same position and the recovery has taken place.”

However, there are suggestions that the late winter and early spring months could bring further stock shortages, which suggests values may rise in quarter one, says Gannon. 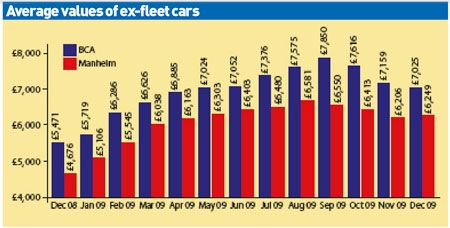 Mike Pilkington, managing director of Manheim Remarketing, agrees: “We are starting 2010 in a stronger position than 12 months ago and, although we will not see the dramatic value rises of January 2009, I expect prices to remain strong during the first quarter.”

Although the winter freeze interrupted showroom traffic, CAP believes there is still sufficient momentum to keep interest high and values strong during Q1.

“This view is shared by many in the trade,” explains Mike Hind, communications manager at CAP.

“This is partly evidenced by some wholesale disposers steadily raising their prices week by week.

"This is in recognition of continued pent up demand and a view that there is plenty of business waiting to be done.”

“Availability of stock will continue to be severely restricted in 2010, though price movements are more likely to reflect the seasonal changes seen prior to 2008,” says Adrian Rushmore, managing editor of the Guide.

The fall was not as steep as the 3% drop seen in October and the 6% fall in November, however.

Used van prices continue to go from strength to strength, with December delivering a new high for LCV values at BCA while Manheim recorded an increase for the fifth month in a row.

“The scale and speed of price movement that has been witnessed over the past 18 months in the wholesale used van marketplace is unprecedented,” says Alex Wright, sales director for commercial vehicles at Manheim Auctions.

“Despite the economic environment, the used van marketplace has remained robust with average used van values up by almost 50% in the last 12 months, despite age and mileage being higher year-on-year.”

Ken Brown, valuation manager, light commercial at CAP, said: “The dynamic in the used van market is not set to change in the foreseeable future.

“That means severe supply shortages ongoing and, unless demand totally dries up, we will continue to see strong or strengthening values.”

However, Duncan Ward, BCA’s general manager commercial vehicles, added: “Condition remains critical and any vehicle that is carrying excessive damage – cosmetic or otherwise – is likely to struggle for attention.”

Meanwhile, an increase in demand has resulted in Aston Barclay launching a new fortnightly van sale at its Chelmsford site.

It has seen overall prices rise by around 10%, while customer numbers and vehicle volumes have also increased.

Manheim DeFleet Services says the cost of damage identified at the end of fleet vehicles’ leases increased significantly in 2009.

Contract extensions may have been a contributing factor behind these increases, reinforced by the fact that the average age of superminis was six months older in 2009 compared with 2008, mini-MPVs and coupés were four months older and small hatchbacks three months older.

Higher mileages contributed to increases in the executive and MPV segments.

The fortunes of small hatchbacks have fluctuated in the past 12 months, according to Manheim.

Average wholesale values rose as often as they fell during 2009.

But while average values were up 24.7% year-on-year, they did not perform as well as the overall fleet sector, which saw a 29.6% increase over the same period.

There were increases in average values in the first three months of the year followed by a 4.2% fall in April, which was wiped out the following month by a 4.5% rise.

Values remained fairly stable until September, when a 7.9% rise was followed by an 8.6% fall in October and seasonal decreases for the remaining two months of the year.