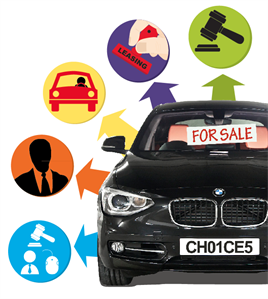 Auctions are the most popular way to remarket vehicles, but other options may be quicker and cheaper for your fleet. Sarah Tooze examines the choices available.

For leasing companies and fleet operators that outright purchase their vehicles, auctions organised by remarketing companies such as BCA and Manheim, are the most popular means of disposal and often the most effective.

Steve Shaw, head of remarketing at Alphabet, says: “It is the most effective way of managing days in stock to ensure the cash is back in the business as quickly as possible.

“For dealers, the ex-fleet stock which comes through the auctions tends to be desirable, commanding strong values and providing a steady stream of vehicles for the forecourt.”

Leasing companies usually make use of both physical and online auctions.

Bryan Stringer, corporate and manufacturer sales director at Manheim Auctions, says: “A mixed approach, which embraces a combination of both online and offline auctions, will undoubtedly deliver the best results.”

Police Scotland, the newly-unified Scottish police force, sends all of its vehicles to BCA, under a national police framework (essentially a pre-tendered contract) set up by the National Association of Police Fleet Managers.

Tony Chalk, transport manager at Police Scotland, explains that this is due to the number of vehicles (Police Scotland has a fleet of just under 4,000 vehicles) and the security of police vehicles when they are sold.

He says: “The framework means strict procedures have to be followed around debranding, keeping vehicles in a secure location, etc.”

However, for smaller fleet operators, cost and logistics (such as the fee for each vehicle handled, plus commission on the value achieved, and transportation) can mean auctions aren’t an attractive option.

Fleet operators that lease their vehicles could consider negotiating a profit-sharing arrangement with their provider on the sale proceeds of their vehicles.

Last year’s FN50 research found that at least 15 companies will profit-share on residual values, although 19 companies declined to comment.

The arrangements that customers can agree with their leasing companies vary.

“There is no hard and fast rule,” says Debbie Floyde, group fleet manager at Bauer Media. “Leasing companies can make a bespoke agreement.”

For example, it might be possible to negotiate a 50% split of the profits.

Floyde describes profit-sharing as “hugely beneficial”, but warns that it may not be right for every fleet.

“If you have high-mileage vehicles in poor condition, is it worth entering into a profit-sharing agreement on the residual value?,” she asks. For those that do have an agreement “it’s important to have visibility”.

“The customer needs to have access to the residual value written on the car at the outset and the sale proceeds.”

Alphabet’s Steve Shaw adds: “Profit-sharing arrangements between a fleet operator and leasing provider can provide a healthy income in some situations. However, the fleet operator needs to have full confidence in the leasing company’s remarketing department and a detailed understanding of the difference between book values and current market conditions.
“The profit values may not be as initially predicted and so both parties can potentially lose as well as gain.”

Fleet managers may have damage charges factored into the overall profit, but NHS Blood and Transplant (NHSBT) uses profit-sharing as an alternative to damage charges.

Its agreement with its leasing provider is based on CAP prices for the month of auction, plus a 5% uplift (which acts as a ‘cushion’ for the leasing company).

Anything that the leasing company achieves above that figure is split 50/50 between it and NHSBT. Anything below, NHSBT pays in full because it is generally down to excessive wear and tear.

The organisation still gets an independent assessor’s report and is able to compare what the profit-sharing arrangement costs versus what would have been paid in damage charges.

While individual vehicles may make a loss, NHSBT has always been in profit overall. Larry Bannon, national fleet service manager at NHSBT, points out that there is also an administration saving.

“I used to spend an inordinate amount of time going through every single invoice for damage that came through, looking at the photographs, looking at the costs, phoning them up, disputing and then coming to an agreement,” he says.

“The scheme is still working very well, the quarterly outcomes do vary, but we are still better off on an annual basis, than if we were paying end-of-contract charges.”