Safety: Reporting near-misses could be a big safety hit 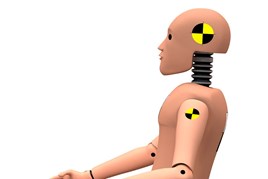 It may sound like more of a puzzle for an episode of Doctor Who than for a fleet operator, but how can recording an event which didn’t happen prevent it from occuring in the future?

“Some models suggest that for every accident there are approximately 90 near-misses,” say Health and Safety Executive (HSE) guidance notes.

“If there is a good reporting system in place, the hazard could be dealt with before someone is injured.”

The HSE defines a near-miss as “an unplanned event which does not cause injury or damage, but could have done so”, such as items falling dangerously near to a member of staff, incidents involving vehicles and electrical short-circuits.
However, this may not be how all fleets regard a near-miss incident, says Will Murray, research director of Interactive Driving Systems.

“A near-miss could be something that nearly happened where there was the potential for there to have been damage, but it could also be minor damage such as a lost door mirror,” he says.

“Whether I class it as a near-miss is a different issue, but a lot of fleets say they don’t bother counting a lost wing mirror in their incident reports as it just comes from the maintenance or the wear and tear budget, even though the mirror itself is in most cases only a few centimetres from somebody’s head.

“The more we can do in terms of improving reporting and making sure near-misses go through as events instead of just maintenance, the better in terms of being able to prevent the incidents in the first place.

“Also, reporting near-misses or minor incidents is really useful for being able to predict the more major things that could happen.

“If we assume that for every 600 near-hits there are 30 property damage incidents, 10 minor injuries and one major injury, the potential for effective remedial action and training is obvious,”  he adds.

Reporting certain workplace incidents, which are referred to as ‘dangerous occurrences’, is a legal requirement under the HSE’s Reporting of Injuries, Diseases and Dangerous Occurrences Regulations (RIDDOR).

But while RIDDOR covers high-risk incidents involving an explosion, fire, overhead electric cables, the collapse of scaffolding and pipelines, it does not currently apply to deaths and injuries stemming from road traffic collisions unless the accident involves the loading or unloading of a vehicle, or the leak of a substance being carried by a vehicle.

“Reporting near-miss incidents is a very important way of identifying problem areas,” he says. “Fleets should be encouraging employees to report all incidents and near-misses. So much can be learned by keeping a near-miss register.”

Murray says that, although this may initially be against the instincts of an employee or fleet operator as the number of recorded incidents will initially rise, in the long-term it will have many benefits.

“It isn’t always easy, but the key thing with reporting is  to get people to report honestly and the more you report  the better,” he says.

“Quite often a good fleet risk management programme will initially increase the number of incidents reported because you are counting events which you wouldn’t have done normally.

“However, if you don’t count them and they get hived off as maintenance issues then it’s really hard to get an actual picture of what’s going on and put processes in place to reduce incidents.

“For example, if you find there are a lot of slow-moving vehicle incidents, you can introduce more low-speed manoeuvring into any training programme.

“If you have a lot of hit-while-parked collisions, you can look at improving parking skills or the layout of spaces in the car park: having the data on different incident types means you can do more about reducing them.”

He adds: “Usually, any kind of intervention will affect other incident types as well, so focusing on a specific issue will also have a positive effect across the fleet.”

Wetters insists that reporting near-misses shouldn’t “be a black point on somebody’s record”.

The HSE says an anonymous reporting system can work to avoid staff fears or embarrassment, although it adds: “It is important to create a culture which encourages reporting of these accidents.” Eurovia classes a near-miss as an event which hasn’t caused any injury or damage but had the potential to do so. Every time a near-miss is reported, Eurovia UK donates £1 to charity (Fleet News, October 29).

Gateshead Council has a strict policy where every incident is recorded. “If you allow a minor incident to go unacknowledged, that has a knock-on effect to other incidents,” says fleet manager Graham Telfer. “Every incident is sent to the driver’s supervisor who then interviews the driver and determines what action should be taken.

“If, for example, a door mirror has been damaged by a third party there is no intervention, but if a driver has either caused some third-party damage or it has struck a vehicle or property then we need to investigate that.

“I don’t want to be in a position where, after two weeks, we get a third-party claim in and the public would then end up telling us about an incident we have caused.”

After two non-compliance incidents the disciplinary system is invoked.

A range of vehicles on Gateshead Council’s fleet are fitted with Lightfoot telematics which monitors driver behaviour through a traffic light system.

Green indicates good driving behaviour, through to unacceptable driving in red, with Telfer sent regular reports in a tabular format.

A score is typically generated based on real-time analysis taken from gear changes, revving, speed and braking. “A colour is a colour,” says Telfer. “If it’s green I’m not interested, if it’s red or amber it gets flagged up and we’ll look at those in more detail.”

Murray says data from telemetry reporting “could actually be classed as a form of near-miss event as speeding flagged up by telemetry may not have caused a collision, but has the potential to”.

“We’ve seen examples of where people have had quite a few CU80s among their drivers in the previous year or two and have put in place a ban on mobile phone use.

“In some cases, the number of mobile phone offences has gone down from 70 or 80 a year to, if not zero, then one or two.

“Training can be important, but it’s only one part of improving safety: putting in place a process and engaging people to follow that process can have an impact.”

The HSE publishes RIDDOR forms online, which act as a template for recording the near-miss information required: the date, time and place of the event, personal details of those involved and a brief description of the nature of  the event.

Useful additional information about an incident can include the way work was organised, the vehicle or machinery involved and the condition of the site or premises where the accident happened.

Wetters says the reporting of near-misses should apply not only to the drivers of company vehicles, but also to grey fleet drivers who are using their own cars for work-related journeys.

“Health and safety legislation applies to all work activities, and that includes driving,” he says. “A lot of people think that when their staff get out on the road it’s up to them to look after themselves, but that certainly isn’t the case.

“When people use their own vehicle for business, the private vehicles used for work purposes do fall under health and safety legislation.”

How to encourage better incident reporting

- A simple in-company/site-based collision database may  be the best way to monitor minor, low speed, low impact collisions below the excess.

- Interviewing the correct employees in an informal manner with the assurance that discipline will not be applied will make them more likely to report.

- Removing or changing crash reporting bonus schemes to focus on total vehicle costs rather than crashes.

- Implementing a strong wear and tear and maintenance policy to identify all non-scheduled maintenance by  crosschecking records against reported crashes, and ensuring that crash codes are allocated before any repairs are undertaken.

- More severe disciplinary action for those ‘found out’ after the event than ‘self reporters’.

- Use statistics positively. For example, show the ratio of major to minor, which improves with better reporting, or average cost per crash, which goes down.

- Specific report and investigation forms. Make forms easy to complete and show that improvements are being made.

- Use all KPIs (no of risk assessments, property damage and repairs undertaken) as well as injuries.