Round table: Public sector fleets on how technology, training and procurement can save money 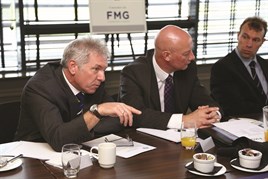 Public sector fleets have been tasked with continuing to provide essential front-line services against the backdrop of austerity.

It’s been a challenge that many have risen to by embracing new technologies and finding innovative ways of working.

However, as budgets continue to be squeezed, the challenge of cutting costs further remains at the top of their agendas.

Fleet News hosted a public sector roundtable discussion, sponsored by accident management specialists FMG, in Leeds to hear how they are managing their fleets.

There are many different approaches to tackling vehicle accidents, but which have delivered success?

Graham Telfer: We’ve introduced a piece of kit that looks at driver behaviour.
It doesn’t tell me where the vehicles are or where they’ve been idling, it just focuses on driver behaviour and we’ve found that much easier to manage, and more economical. Each vehicle has a red, amber and green display on its dash to influence the driver and from the reports it generates it has meant we’re now able to identify drivers who need training more effectively. We’ve also seen a 10% reduction in accidents.

Harvey Stead: Does the lack of track and trace make it an easier sell to the driver?

Graham Telfer: It has an advantage. In the past when we have had tracking the problem we found was being able to utilise the mountains of data effectively.

Larry Bannon: We have a suite of initiatives to tackle areas such as fuel, accidents or idling, and we apply two different approaches to each element of the fleet, be it the liveried bluelight fleet or our lease car fleet. In the lease car fleet, we put people through a psychometric test and any driver identified as high risk has on-the-road training. In the commercial fleet, there is refresher training every two years after initial intensive training. It has brought us success in being able to drive down our at-fault accidents, but we’re now moving to a telematics system, with all our vehicles being fitted over the next couple of months. In our in-car training, we’re also trying to address how our drivers can avoid incidents in which they are not to blame.

Steve Thompson: When we looked at telematics, the first thing that was said by our driver trainers was that they would not put something in the vehicle that could distract the driver.

Larry Bannon: The counterpoint to that is that people do look at the dash to check their speed, fuel levels and warning lights.

Richard Flint: We’ve been doing a lot of analysis on telematics to establish what would happen if we introduced it in terms of a reduction in fuel usage and accidents. Small reversing accidents at low speed is one of our biggest issues and telematics isn’t going to do us any favours with tackling that issue. There is also the problem of the time and effort you need to put into analysing the information, especially when you may have fewer and fewer staff.

Steve Thompson: We saw a 34% reduction in collisions in the first year after fitting telematics, but after a few years this has levelled out, suggesting we have reached a limit to what we can achieve.

Tony Chalk: We have just merged the regional forces in Scotland into one national force and by tracking we have been able to see what vehicles are under-utilised. We will also get the benefit of accident reduction, but for us it’s about reducing mileage and fuel.

You employ driver training, but what type of training do you use? For example, is it online assessments or one-to-one training?

Richard Flint: Different forces have slightly different policies, but it can range from a basic assessment to drive a vehicle up to advanced response driving, which can involve six weeks of highly-intensive training. The issue we have is young, inexperienced drivers being handed the keys for a van.