'I was very sceptical but telematics has been a plus' 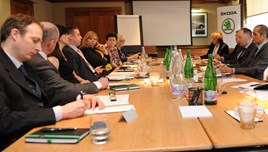 Fleets are using telematics and in-cab camera technology to improve driver behaviour and reduce collisions. Many of the 2016 Fleet News Awards nominees who attended our roundtable, sponsored by Škoda, are using these systems.

As well as using data from the technology to reduce fuel costs and increase safety, they have also been used to defend employees against fraudulent claims or false allegations over bad driving.

Why did you introduce telematics?

Dermot Coughlin: Our decision to adopt telematics was driven by safety and saving money on insurance, as there had to be a cost-effectiveness to it. We looked at a lot of systems and decided to go for a data-led one. It’s very simple and gives us a lot of information. We have some basic KPIs and we risk manage it with a red and green arrow system, identifying where the high risks are, etc. The guys have to get in the green – it’s as simple as that. If a guy is in the red on a regular basis, we train them and it’s a fairly simple process, taking four to six weeks. We coach the guys, tell them what they’re doing wrong, build their confidence in what they’re supposed to be doing, and then if they haven’t improved, we’ll have one of our trained assessors sit down and chat with them. We also go out with the driver and show them exactly what they’re doing wrong on a drive.

Graham Telfer: I was always very sceptical about telematics in the beginning. It was the mountains of data I was afraid of and staff getting data overload. Telematics can record some things you’re not interested in; I’m interested in fuel and accidents. All our vans are fitted with Lightfoot which uses a red-amber-green system, and a colour is a colour. You get red, you get a warning – it’s involving the driver all the time. Telematics has been an absolute plus.

What challenges have you faced with telematics?

Dermot Kelly: The big problems we had in the past were the huge cost of having the system and suppliers always wanting three- or five-year contracts. This meant it was not for us because a lot of our work contracts are for a couple of years, so it was possible that we could end up with a few hundred telematics units which we were not able to use. However, the industry has changed quite a bit and we now use a system that doesn’t have a fixed-term contract.

Norman Harding: When we first installed telematics, it turned out to be very productive. It was a new system and we could really identify areas such as improved vehicle utilisation. After the first three to six months, the benefits started to tail off as the telematics had done its job. We’ve had the system for six years and we do suffer data overload with it, particularly in trying to identify driver behaviours. For example, for a simple thing such as a dustcart picking up a bin, the way the bin mechanism jerks the truck about sends spurious incidents which are hard to determine.

Are there any other ways you can avoid data overload?

Clare Cain: The data you get is good data, although some units give too much, and if you’ve got too much data you are not streamlining the process, you are continually fighting fires. We started off with minimum data coming in, getting that bit under control, and then we started getting more data, getting that under control before starting to tighten it down and squeezing the information that way.

Dermot Coughlin: It’s really important to include in a policy what you’re using telematics to look at, so if you miss something, at least you’ve got some mitigation to say well, that’s not something we were monitoring. If, for example, you miss speeding – and nobody should – and you’ve got information that has identified a habitual speeder but everybody’s ignored it until there is an accident, you are in serious trouble. You could be the first guy prosecuted for corporate manslaughter.

Norman Harding: On that point about speed, I’ve been trying to negotiate with a number of telematics companies to get a system to integrate with the truck so it physically stops the vehicle from speeding. You can have an automated system which will give you an audible warning when the vehicle is speeding. Good drivers will adhere to limits wherever they can, but you always get the bad ones who just don’t care and if you can get the telematics system to interact with the speed limiter, then it will be physically impossible to break the speed limit.

Alison Moriarty: My only reservation with speed limiters is that the only sustainable way to improve safety is to change driver behaviour. As soon as you rely on a mechanical thing, if the driver has to go into a vehicle that doesn’t have a speed limiter fitted they may not carry on with that behaviour.

Dermot Coughlin: I completely agree. Driver behaviour is something that you can’t change in one day; it’s something that’s over a prolonged period of time. We find six months is the time when people stop thinking about doing something and it becomes second nature thing, and I say that from personal experience. On the other hand, if you take those controls away, people will revert back over a period of time, so it’s something you have to constantly manage.

Does anyone use in-cab cameras? What impact have they had on your fleet?

Luke Stanbridge: We based our decision to buy cameras on insurance premiums. We are not self-insured because we are not large enough at the moment – we’re on the cusp, with 140-odd vehicles. We had a spate of accidents and if you or someone else claims, it goes on the insurance premium and that was going up and up. We looked at what we could do about this and that’s when we brought in the cameras, which paid for themselves almost immediately.

We also brought in speed limiters and trackers on all new vehicles. We drastically reduced our incident rate, mainly based on the fact that people were driving more sensibly. We don’t have the cameras and telematics linked together in our system. The cameras have 16gb cards and that will give over a week’s data. If there is a problem, the line manager will get the driver in for a chat and also pull the card out of the camera. We sometimes get spurious complaints that a van has been driving dangerously, that it was in the wrong lane and swerved in front of someone, but using the camera we can find they are often talking about a different vehicle.

Norman Harding: Cameras and telematics are a big investment, so you’ve got to be sure what you want to get out of it. We tried to get our insurance company to reduce the premiums on the equipment we installed, but they are not interested in what we install or what the equipment is, what they are interested in is the incident rate. So it could have all the whistles and bells, but if it doesn’t actually impact on our incident rate, then it won’t bring the premium down.