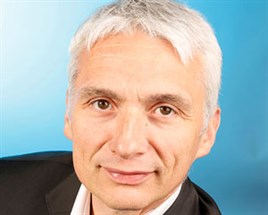 Who has had the biggest influence on your career?
The managing director of the first BNP Paribas entity that I worked in. He advised me that there was nothing more exciting professionally than managing people and signing deals. He was right!

What is your dream holiday?
A motor home tour of New Zealand with my family. It looks such a nice and diverse country.

Who was the last person you received a text message from?
A friend to arrange a lunch when we next meet.

You are on a desert island – what three things do you take with you?
A knife, a lighter and a photo of my family.

What is the first thing you would do if you were made Prime Minister for the day?
Request an appointment with the Queen. That would be such an honour.

What is your best childhood memory?
Spending the day in the woods and fields. I could really feel free there.

When was the last time you took public transport and where were you going?
The London Underground on Monday to go to our London office.

What was your biggest mistake in business – and what did you learn from it?
Not listening to a customer request, thinking he would not leave because of it. I never made that mistake again.

Which historical character do you most identify with?
I have limitless admiration for Nelson Mandela and what he did for South Africa.

How would you describe your leadership style?
I like to empower, challenge and support the people who report directly to me.

What advice would you give your 18-year-old self?
Dare to try!

If you won the lottery, what would be the first thing you would buy and why?
A bigger wallet…

What is your favourite film?
Les Tontons Flingueurs: a French comedy from the ‘60s. I still can’t stop laughing when I watch it.

What is your favourite book?
Anna Karenina by Leon Tolstoy. There is so much energy and passion in it, it is actually exhausting.

What is your favourite dish at a restaurant?
Fish baked in salt. The taste is unique and this is one for sharing.

What is your guilty pleasure?
Ristretto’s Italian-style coffees. I have too many a day…

When did you last feel guilty about the environment?
Any time I see how much plastic packaging we remove from food.

Who was your childhood hero?
Bjorn Borg, the tennis champion. He was a winner and apparently in control of everything.

What is the one object you couldn’t live without?
A bed, even for some hours a night.

If you could work in another profession what would it be?
A rugby coach.

What’s the best gift you’ve ever been given?
Trust.

What is your dream car?
A 1965 Ford Mustang. It’s so stylish that it could be British.

What has been the most pivotal moment in your life?
When I became a father.