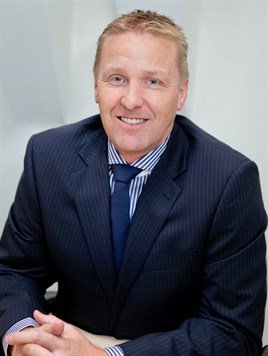 David Hosking has been in the contract hire and leasing industry for the past 25 years. He joined salary sacrifice specialist Tusker in 2003 as sales director, becoming CEO two years later.

Since losing my daughter Beth to leukaemia, I have become a fitness fanatic, as I appreciate now that we come this way but once and we all need to look after ourselves. I run around 40 miles and/or cycle 300 miles a month. I raised money for the Teenage Cancer Trust during 2013 by running in the Great North Run, the Warwick Castle Half Marathon and Tough Mudder, and I am hoping to take part in the RideLondon100 this year, as well as Tough Mudder again in July.

My advice to my 18-year-old self is the same advice that I gave to my 25-year-old son recently: always work as hard as you possibly can.

My wife and I are hooked on the Game of Thrones TV series and I’m currently reading the fourth book in the series.

First fleet role: Sales executive at Highway Vehicle Leasing, based in Windsor in 1988. Fleet is such a
dynamic, fast-moving environment, full of challenges, that I can’t imagine being anywhere else.

Biggest mistake in business: I do remember one sales presentation I was making to a big prospect
including their senior directors, and when introduced to the team I asked the HR director when her baby was due. The room fell silent as it turned out she wasn’t pregnant! I learned to fully acquaint myself with the facts before opening my mouth. Needless to say, we didn’t win the business.

Biggest career influence: Colin McLean, formerly MD at Highway Vehicle Leasing, who back in the mid-1990s gave me some excellent business advice. He said to never feel threatened by employing the most talented people, always to give your team full recognition for things – even if they haven’t always worked as well as intended – and that to grow something to its full potential, sometimes you need to prune away the dead wood.

Biggest business achievement: Last year, the company reached the final of the Innovation section of the National Business Awards, and was also named Business of the Year at the Business Excellence Awards. Those were both pretty special achievements and made last year a very notable one for us at Tusker.

Childhood ambition: To be a pilot. When I was 17 I attended an RAF aircrew and officer selection
weekend, but unfortunately it turned out I had astigmatism, and my less than perfect eyesight meant I was never going to be allowed to fly fast jets.