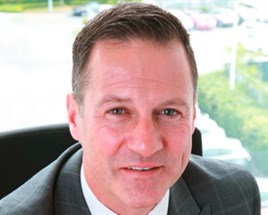 What has been your biggest achievement in your current role?
In September we achieved our best market performance for nine years.

Who has had the biggest influence on your career?
My father, who has spent 50 years in the car business.

What has been the most pivotal moment of your life?
The birth of my daughter. It’s the best thing that has ever happened to me.

Who was the last person you received a text message from?
My boss.

What is your favourite sitcom?
I don’t have too much time for television, but when I do it’s football or Peppa Pig!

What is your favourite film?
Jerry Maguire. There’s a great scene when he’s fired; the whole office stops while he departs, then carries on like nothing’s happened. That’s the reality of business.

What is your favourite book?
Black and Blue by Paul Canoville. It’s the extraordinary life story of Chelsea’s first black
footballer who survived through racism in the early 1980s, drug addiction and cancer twice.

What is your dream holiday?
A week away with my wife and daughter at our family house in Cyprus. It’s got a great climate, food and drink, and I’d be spending time with my favourite people.

What would you say is your guilty pleasure?
A cold beer after work.

When was the last time you took public transport and where were you going?
I got a bus on the way to the tennis at Wimbledon.

What is the first thing you would do if you were made Prime Minister for the day?
Introduce another public holiday.

You are stranded on a desert island – what three things do you take with you?
Family, an iPod and cold beer.

What was your biggest mistake in business – and what did you learn from it?
I tried to change too many things too quickly. I realised that not everyone runs at the same speed.

If you won the lottery, what would be the first thing you would buy and why?
I’d pay off my mortgage and spend my money on travel.

Christmas with my family.

Who was your childhood hero?
Frank Bruno. I admire his fighting spirit.

What is your favourite dish at a restaurant?
Chicken Pathia and rice. I love Indian food.

How would you describe your leadership style?
One of the team. We win and lose together.

What’s the best gift you’ve ever been given?
My wife bought me an Omega Seamaster watch.

When did you last feel guilty about the environment and why?
I don’t. I try to recycle everything.

Which historical character do you most identify with?
Winston Churchill. My favourite quote of his is: “When you’re going through hell, keep going.”

What is the one object you couldn’t live without?
My iPhone.

If you could work in another profession what would it be?
Sports rehabilitation.

Which superhero from comics would you most like to be?
Superman. Who wouldn’t?

What is your dream car?
Aston Martin DB9.