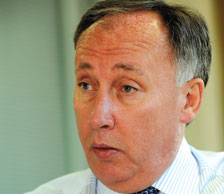 As I have only been at Europcar for seven months, it is obviously pretty early to make any comments on achievements.

Nevertheless, I am very proud of our ‘freeDeliver’ advertising campaign, which is the first in our history in the UK. It separates us from the competition and is done in a nice, humorous way.

Probably my mother, as she believed that success could be achieved by hard work.

As a part of my career I lived in Asia for 13 years and visited many wonderful places.

However there is nothing to beat a good game of golf at St Andrews, where it is always a little bit windy.

My son, thanking me for buying him dinner again last night!

Only Fools and Horses and, as they say, “one day, Rodney... I did not believe I would be in car rental”!

My wife would say I am not a great film watcher and would prefer country or property programmes.However, if pushed, some of the Humphrey Bogart classics are wonderful.

What three things would you take with you to a desert island?

A telephone to call for my Europcar ‘freeDeliver’ sub-aquatic vehicle, a golf club to practice my sand shots and an i-Pod for music. Funnily enough, Gonna Make You Sweat is a favourite right now.

Yesterday, when I travelled to our Leicester office to attend our customer experience meeting. There in an hour – fantastic.

Reduce the amount of overheads involved in Government, starting with MPs and the House of Lords, to a slimmed-down, more agile version.

What is the first thing you would buy if you won the Lottery?

I would set up or fund a children’s home in some of the poor parts of Asia as I saw so many instances of extreme poverty during my time there.

As a young man entering management, not spending more time listening, and giving everyone the opportunity to input. Sometimes you are in too much of a hurry.

Playing golf as a part of a Championship School in Scotland against the equivalent in England, Ireland and Wales in the Aer Lingus Schools Golf Foundation at Portmarnock.

More recently, I had the opportunity to take my son there for the first time in 37 years and it was wonderful, even though I lost.

I am very fond of all Asian food because of my time spent there and in particular Japan – sushi and sashami would be real favourites.

Lead from the front, walk the talk and get the team on board.

Yesterday when I took the train to Leicester, but I did have a little side objective which was to get up to date on my emails on the Blackberry.

My father, as one of the best-known transport people in Scotland, recognised for hard work and the highest levels of integrity. I respected him very much and still do.

Roy of the Rovers. As a Man Utd fan, it must be an incredible sensation to play in front of 70,000-plus people.

Got to be a top-of-the-range Aston Martin.

Has there been a pivotal moment in your life?

The birth of my son was the most incredible thing I have ever seen and watching that child grow up and start to build a career is just wonderful.