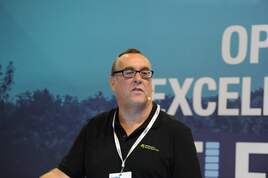 First fleet/automotive role: I joined the Freight Transport Association (FTA) in 1981 as an assistant regional secretary – which is another way of saying I was a jack of all trades. Since then, I have worked in a variety of roles within FTA – all with different challenges, but all with the same core message.

As corny as it sounds, I really enjoy the variety, pace and dynamism that is part and parcel of the transport industry and, in particular, the ‘can-do’ attitude of many of the people I meet during my work.

Career goals at the FTA: To establish and grow FTA’s Van Excellence programme. Vans are fundamental to everything we do and there are many fantastic opportunities to recognise excellence and to raise standards for fleet operators, which Van Excellence can help them achieve.

Biggest business achievement: Taking Van Excellence from what originated as a rough plan on a single piece of A4 paper to an initiative that has more than 100 engaged operators, who between them operate more than 200,000 vans.

Biggest mistake in business: I can’t pin down a single big mistake. Like most people, I’ve made lots of little mistakes and hopefully learnt a little from those along the way.

Biggest career influence: It’s almost impossible to tie it down to one individual. But I can say I hope I’ve learnt from some of the strong, inspirational people I’ve known and have also recognised how not to go about things from a few others!

If I wasn’t in fleet: My wife reckons I’m a frustrated chef.

Childhood ambition: To run in the Olympics (I was a reasonably handy runner as a kid) or an astronaut, because nothing beats an astronaut.

Three vehicles I would like in my garage are a nice big Merc with all the toys, a 1960s Vespa and a Pinarello Dogma racing bike.

My advice to my 18-year-old self would be to work harder and be confident in your abilities.

My first memory associated with a car was ‘helping’ my dad hand-paint an old Cortina.

The first thing I would do if I was made Prime Minister for the day would be to ban self-service tills in supermarkets. They drive me mad!

My favourite film is The Blues Brothers. It combines my love of soul music, car chases and general daftness.

The book I would recommend others read is The Chimp Paradox by Dr Steve Peters.

Away from the office I like cycling (watching and doing), Northern Soul (a legacy from a misspent
youth) and curries.

I want to be remembered as: ‘He was all right’.