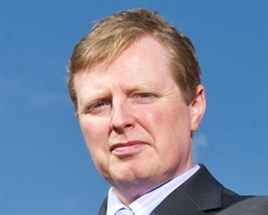 What is your biggest achievement in your current role?
Just creating employment for people and being able to make a positive contribution to society. SMEs are the lifeblood of the economy.

Who has had the biggest influence on your career?
My business partner, Lloyd. He usually backs my judgement, even when he’s not sure it’s the right call.

What is your dream holiday?
A cruise round the Far East – China, Japan, Vietnam. My family and I take a cruise holiday every year, but we haven’t had the opportunity to go that far as I can’t spare more than two weeks off at a time, and to do the Far East justice, you need more time than that.

Who was the last person you received a text message from?
The lead guitarist in my glam rock band.

What is your favourite sitcom?
Either Not Going Out or The IT Crowd. The former for Lee Mack’s one-liners, and the latter for Graham Linehan’s off-the-wall characters.

What is your favourite film?
That’s like asking me which of my children I like best. I’ll say Local Hero because it tells you all you need to know about the work/life balance, it’s Scottish, and it’s very funny.

When was the last time you used any form of public transport?
I caught a bus from Geiranger in Norway to Mount Dalsnibba in July. The view from the top of the mountain over the fjords is spectacular.

What is the first thing you would do if you were made Prime Minister for the day?
Declare a public holiday every year on that date and call it “any idiot can do it day”.

If you won the Lottery, what would be the first thing you would buy?
I’d pay for Genesis and Peter Gabriel to reunite for one last gig together. It’d need to be the Euromillions though.

What advice would you give your 18-year-old self?
Never grow up and don’t try to please everyone, because you’ll end up displeasing most of them. Do what you think is right for you, and if other people like it, that’s a bonus.

What is your favourite book?
Espedair Street by Iain Banks. I love the warts and all depiction of the rise and fall of a Scottish rock star, intertwined with locations I grew up with. Humour and pathos in equal measure.

What is your best childhood memory?
I think being on holiday aged five with my mum and dad at Butlins. It didn’t get much better in the ‘60s – well, not for a five-year-old.

What was your biggest mistake in business and what did you learn from it?
My biggest mistake was choosing business over a music career when I was in my 20s. I took the corporate dollar instead of pursuing my dream. But I don’t dwell on the past – I’ve made the best of it and I do all right, so who’s to say I was wrong? Not anyone who’s ever heard me sing, that’s for sure.

Your favourite dish at a restaurant?
Something with mixed shellfish in a Thai restaurant.

How would you describe your leadership style?
I would say laid back, but my staff might say David Brent.

When did you last feel guilty about the environment?
Probably the Fukushima incident. We humans think we’re so smart because we can split the atom, but we almost split the world instead. Everything we do seems to screw up the planet, but we’re too far down the road to do a U-turn, so it’s damage limitation at best.

You are going to a desert island – what three things do you take with you?
An acoustic guitar, an iPod with solar charger and Jennifer Aniston.

Who was your childhood hero?
Bruce Lee – the best martial artist ever. He overcame a lot of prejudice to get to the top. I still think there is more to his untimely death than we’ve ever found out.

What has been the pivotal moment in your life?
The death of my mother when I was 13 and suddenly alone. I realised then that I had to make things happen for myself, because other people won’t always be around to help. The best lessons in life are the hardest learned.

What is the one object you couldn’t live without?
Anything that plays my music. Material things don’t matter, but music is its own reward.

If you could work in another profession what would it be?
I would be a rock star – there’s still time!

What’s the best gift you’ve ever been given?
Health – good genetic material.

What’s your least favourite food?
Celery. It tastes like aftershave, but without the benefit of the alcohol.

Which superhero from comics would you most like to be and why?
Iron Man as played by Robert Downey Junior. No super powers, just a fancy suit and a quick wit – in fact, that sounds like me already.

Which historical figure do you most identify with?
Winston Churchill, because he stood up to the threat of fascism, and unlike today’s lightweight politicians and spin-merchants, he wasn’t afraid to make the hard decisions.