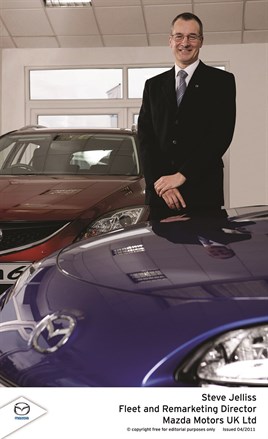 Having been in the job for only a few weeks I think it would be a bit much for me to claim the credit, but I do think our Mazda6 Business Line initiative is one that I’ll look back on as an early success.

My wife, who has both consciously and unconsciously been hugely supportive and a great sounding board when I’ve faced career opportunities and challenges.

I’d like to go to Antarctica for its wilderness, scenery and wildlife – and really be away from it all.

Who was the last person you received a text from?

My boss, checking on the sales outlook.

Gavin and Stacey – some of which is particularly entertaining if you used to live in Billericay as I did.

When was the last time you took public transport?

I got the bus and a train to go and see Eric Clapton, a long-standing favourite performer, at the Royal Albert Hall.

What would be the first thing you did if you were made Prime Minister for the day?

Check the balance of income and expenditure on transport, looking for opportunities to allocate more resources to improving the transport infrastructure.

One Flew Over The Cuckoo’s Nest.
It’s very thought provoking and a great mix of comedy, pathos and joy, with
Jack Nicholson outstanding in the lead role.

Delaying ‘pulling the plug’ on a struggling project, taught me not to throw good money after bad.

Family holidays in Cornwall – exploring beaches and rockpools, walking around small tucked-away harbours and experiencing the sights of the fishing fleets.

If you won the lottery, what would be the first thing you buy?

I’d buy my wife her dream house, she’s earned it.

What three things would you take to a desert island?

I think I’d find my triathlon kit handy – the wet suit for going fishing, mountain bike to get around the island and trainers to protect my feet from the coral.

Graham Hill, a racing driver who won Le Mans, the Monaco Grand Prix and the Indy 500 – I admired his apparently devil-may-care outlook on life and his achievements on the track.

Eggs Benedict for breakfast – it reminds me of a fantastic touring holiday of the California coast and wine regions a while back when I first tried the dish.

I don’t, since I don’t hold myself personally responsible for the environmental challenges we face. However, I will be doing my best to help improve the outlook and Mazda’s Skyactiv technologies will assist me in that.

I like the idea of having Spiderman’s agility, strength, reflexes and ability to climb whatever he pleases.

AC Cobra. I’m well acquainted with great roadsters through driving Mazda MX-5s and I just love the sound of a V8 engine.

What was the pivotal moment in your life?

Leaving Ford to go into marketing services on the agency side, which opened up a whole new chapter in my life and allowed me to grow both personally and professionally in a way I had never imagined possible.