Premium, mid-range or budget, which tyres are best?

Was this article useful?
15 people found this useful

Andrew Don speaks to the experts about the benefits and drawbacks of buying cheap, mid-range or budget tyres. 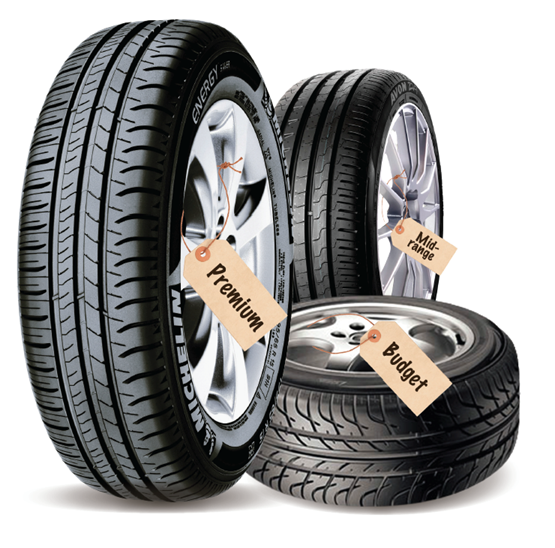 Fleet managers face an almost bewildering amount of choice when deciding which tyres to use. The Tyre Industry Federation says that more than 300 brands sourced from more than 45 countries are on sale in the UK.

These can generally be split into three categories: premium, mid-range and budget.

Tyres in each category have their own strengths and weaknesses, meaning that when fleet managers have to choose a brand they must – pun acknowledged – tread carefully.

Company car replacement tyre authorisation is almost exclusively on a like-for-like basis and that means up to 90% of models are fitted with premium brand tyres – Michelin, Goodyear, Pirelli, Continental and Bridgestone, according to Peter Lambert, fleet director at Kwik Fit.

"However, currently half of replacement van tyres are mid-range," said Lambert. 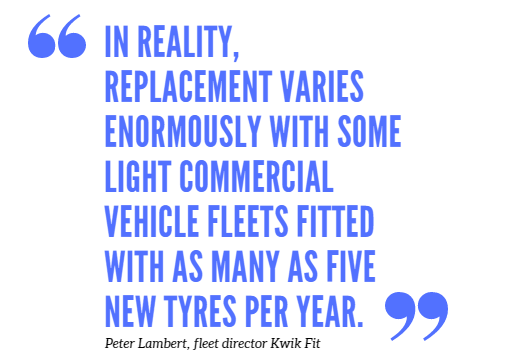 "The majority of van tyres are replaced due to damage rather than wear. That is unlike the vast majority of company cars where 80% of tyres replaced are due to wear. The average tyre consumption across Kwik Fit’s fleet customers is about 1.65 tyres per vehicle per year.

“In reality, replacement varies enormously with some light commercial vehicle fleets fitted with as many as five new tyres per year.”

The damage means fleets are not always getting the maximum benefit from their investment in premium tyres, says Lambert, so managers are choosing to limit their cost exposure and opting to fit a higher percentage of mid-range tyres to vans.

However, there is no one-size-fits-all answer to tyre choice, says Andy Fern (below), head of fleet at Michelin, and decisions should be taken fleet-by-fleet and with the direct help of the manufacturers. 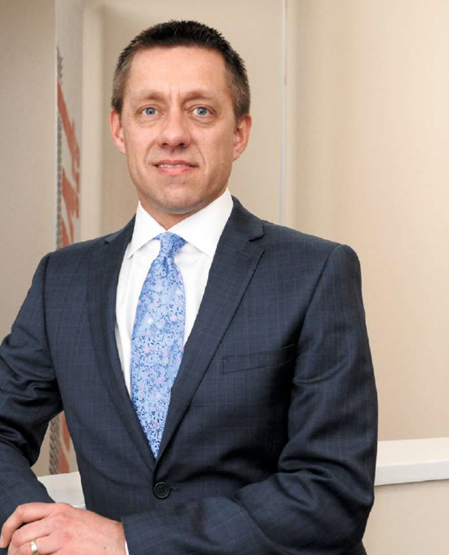 Many facets must be considered including price, fuel saving, safety, longevity, supplier support, and the occurrence of tyre damage.

Out of these, safety should always be the main factor, says Matthew Smith, director of Falken Tyres UK. He says: “This means buying rubber from a reputable brand. It is also important the correct tyre size, speed and load ratings are specified for a vehicle.”

Smith says when looking at cost, it is “really important” to take into account wholelife cost and not simply select the cheapest tyre. He adds mid-range tyres can be very close in quality to premium ones.

“It’s important to look at the whole picture of performance, review tyre ratings and what your dealer tells you,” says Smith. 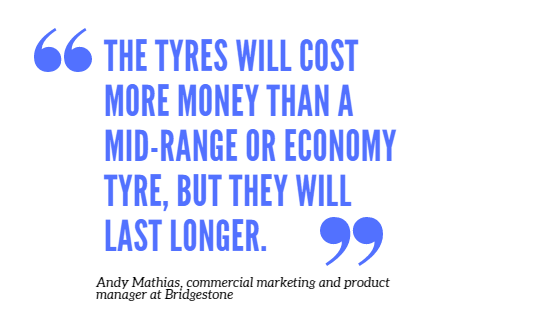 “The tyres will cost more money than a mid-range or economy tyre, but they will last longer,” says Andy Mathias (below), commercial marketing and product manager at Bridgestone.

Premium casings enable multiple retreading and the tyres incorporate the latest and most advanced technologies due to the investment made in research and development.

“The technology of premium tyre brands is constantly evolving. Bridgestone’s Ecopia products, for example, have been developed to provide up to 7.2% fuel saving compared with standard tyres,” says Mathias.

Millbrook has independently verified this saving and it is also backed by realworld trials, he adds. 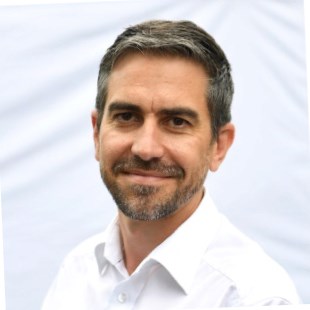 READ MORE: Shop around for a tyre purchase plan that suits you

This, his says, gives outstanding structural durability that pays off, because after its first life, the casing serves as valuable raw material for retreading.

“By reusing the casing, fleets can minimise their environmental impact as well as maximise the value of their tyres,” he says.

Apollo Vredestein’s Ricky Mitchell cites a two-year tyre damage warranty to give peace of mind and confidence in the product – “an insurance for a fleet manager”, as he calls it.

He says while premium tyres cost more, they are better quality in every way from materials through to processes to give more guarantee of quality and better service.

The tyres are often designed in co-operation with vehicle manufacturers so they are the best fit, says Mitchell.

“The purchase price for a premium tyre would be higher, relatively speaking, but the tyre offers the best combination of safety, durability, fuel economy (rolling resistance) a low noise level, and all-round good driving performance.

Continental’s Steve Howat adds that manufacturing and design technology continues to evolve and the premium manufactures have the ability to now consistently produce tyres without any inherent quality issues.

Choosing Michelin has given Addison Lee access to the latest technology which is key to keeping customers safe, says Rob Daniels, head of fleet at the private hire company.

The business has fitted Michelin CrossClimate tyres across most of its 5,000-strong fleet and describes the summer tyres with winter certification as a “fantastic” innovation.

The company operates the largest passenger car fleet to adopt the tyres in Britain so far.

“Achieving this level of traction and on-road performance in all weather conditions is a key consideration with a passenger and courier fleet like ours.

“Braking performance is paramount  in an inner-city environment for the safety of our drivers and passengers,   as much as for pedestrians and other road users.”

The CrossClimate tyres are fitted on its Ford Galaxy, Toyota Prius and Mercedes-Benz E-Class vehicles.

“This is matched with the longevity we’re accustomed to from Michelin.” 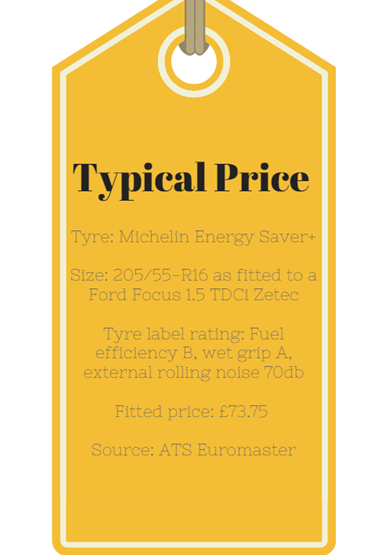 Mid-range tyre brands such as Uniroyal, Kumho and Cooper might not be as well-known as the premium brands, but they still invest heavily in design and testing.

For example, Falken has developed what it says is a pioneering manufacturing process to combat undesirable droning, which is a persistent hum from the road.

The company has named this innovation Silent Core. Such tyres have an ether-polyurethane foam applied to the inside of the tyre carcass. The foam layer absorbs sound and decreases noise.

Apollo Vredestein’s Ricky Mitchell says the quality of mid-range tyres is “good but performance could be a little compromised”.

The materials are the same but the product does not use the latest technology available, he says.

“This allows manufacturers to reduce costs to serve a bigger range of customers, including fleets, and dealers who want to offer end-users a choice of a cheaper tyre.”

Mid-range brands may appeal to fleets which have to replace tyres due to sidewall damage before the tread depth wears, but want better quality than budget brands.

Often choosing a mid-range tyre can mean getting a branded tyre from the same people that manufacture the premium brands, but at a cheaper price.

The enforcement agency had fitted budget tyres to its vehicles to keep costs low, but soon after joining the company, fleet manager Andrew Waring changed the policy.

“I had guys coming up to me and saying that on a damp and greasy road their cars were handling really badly on the budget tyres,” he says.

“It could have been caused by an issue with the cars, but you can get budget tyres which will handle ok but the tyre wear is quite phenomenal, and you get budget tyres that last forever and a day but the roadholding is awful.”

Wearing opted for Firestone and Avon tyres as they can be supplied by the two garages it uses for servicing, as well as by supplier ATS Euromaster.

“In reality, the cost wasn’t much more than the budget tyres, but the handling of the vehicles improved dramatically,” he adds.

“They have more than paid for themselves in terms of better handling and tyre life.”

The company’s vehicles each travel around 30,000 miles a year, and front tyres are typically replaced after 15,000 miles. 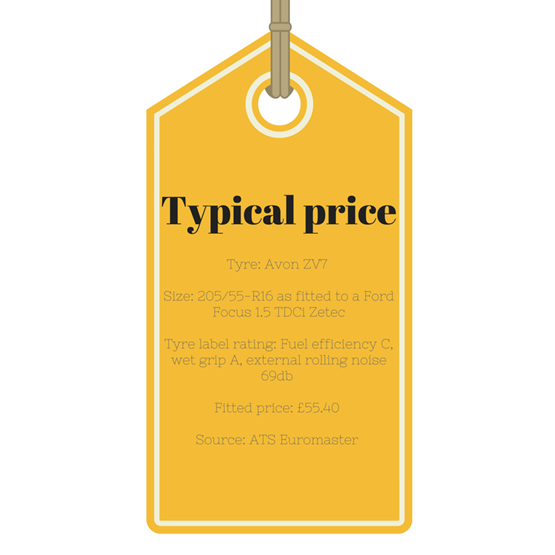 You usually get what you pay for when it comes to budget tyres.

Andy Fern, of Michelin, adds that savvy fleet managers will look at the total cost of ownership.

He says budget tyres lack the investment in time and research that goes into premium tyres.

Apollo Vredestein’s Ricky Mitchell agrees that “budget tyres are the easiest choice to save money in the immediate, short-term, but they are never the best choice”.

He says they give lower performance, have a shorter life, and are sometimes even unsafe after a few miles.

Bridgestone, which includes Dayton economy tyres in its range, says its own budget tyre has many advantages.

These include a low initial purchase price and the support of a partner network for breakdowns, which, it says, would not be true of most economy brands.

They also come with the support and advice of local Bridgestone sales, audit and technical teams, which also would not be true of most economy brands.

And the tyres are retreadable, the company says, which extends overall life.

Some budget products, however, can prove a false economy as Shirley’s Transport in Stoke, testifies.

Director Arthur Shirley recalls that his company recently bought a new truck which was not fitted with Bridgestone-brand tyres, its preferred product.

“It did 17,000 miles less that we would expect and while other factors can come into play such as driving style and weather conditions, you can’t ignore the statistic.

“If this was carried over our entire fleet, then that is a lot of money,” Shirley says.

Tyres are one of Gateshead Council’s leading cost considerations, after fuel. The local authority operates 150 light car-derived vehicles, 150 vehicles up to 7.5 tonnes and 200 heavy goods vehicles. It also operates 1,000 plant and horticultural vehicles.

Graham Telfer, fleet manager at the council, says: “Following austerity budget controls we have had to be more astute when purchasing.”

Telfer opts for Sava tyres – what he describes as a budget first-line product from Goodyear which adheres to the manufacturer’s quality control.

He says they compare with the mid-range tyres for roadholding and noise under the labelling scheme, for example. He uses these on all car-derived vans, tippers and a fleet of 40 minibus vehicles “which return an acceptable operation on these tyres”.

Telfer operates all large commercial vehicles on remoulds on Maragoni retreads from 7.5-tonne to 26-tonne refuse collection vehicles which he says give excellent performance in adverse conditions.

Kerbing bands are fitted on all truck tyres to avoid sidewall damage.

The tyre labelling scheme can be a useful tool for fleet managers comparing tyres for wet grip, fuel efficiency and noise performance.

It was introduced under the European Tyre Labelling regulation, with tyres rated from A to G.

Steve Howat, general manager – technical services at Continental, says a vehicle fitted with a set of A-graded tyres could potentially provide a fuel saving of about 7.5mpg compared with one fitted with G-rated tyres.

A-grade tyres also deliver a 30% improvement in braking distance compared with G-rated ones, he adds.

However, Jamie McWhir, customer engineering support manager at Michelin, says: “While an at-a-glance look at a tyre label can help inform a fleet manager’s decision, the labels should only be a rough guide.”

Fleet managers should instead focus on identifying the demands their fleet vehicles face, and what policy would offer them the lowest whole-life costs – all with the assistance of tyre manufacturers, he suggests.