This editorial feature appears in the March, 28 2019 issue of Fleet News and is sponsored by The AA and Goodyear 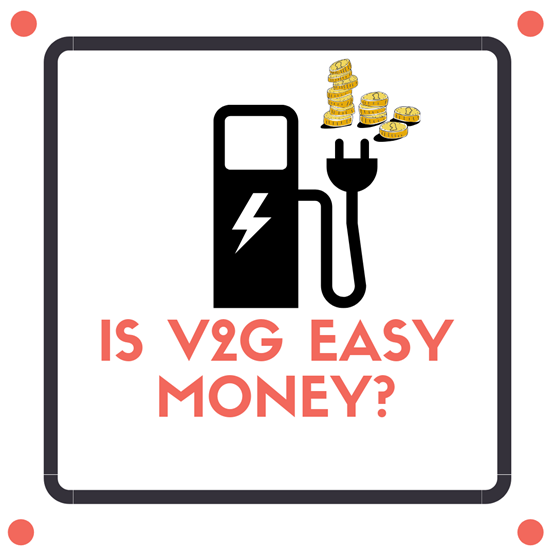 Company cars and vans tend to earn a business money while they’re out on the road, but could electric vehicles  (EVs) also be a source of income when they’re parked?

That’s one of the potential benefits of vehicle-to-grid (V2G) technology, which allows EV operators to sell electricity stored in their vehicles’ batteries back to the grid when they’re plugged in, enabling the network operator to make up the shortfall when demand outstrips supply.

“Multiplied by a couple of million vehicles, you could be looking at a US$20-70 billion (£15-53bn)industry by unlocking these resources,” Paige Mullen, European project manager at Nuvve, told a recent V2G workshop arranged by Level (Low Emission Vehicle Enterprise and Learning) in Nottingham.

“The great thing about using a vehicle in this way is that somebody has already bought it as they’ve made the financial decision to electrify their fleet, so V2G allows them to tap into a resource that’s already been financed and use some of those revenues to offset the cost of that vehicle.”

V2G has already attracted significant interest and investment – the UK Government last year awarded £30m in funding to 21 V2G projects to explore and trial both the technology and commercial opportunities.

Among the reasons for this is the expected growth in the number of EVs, which will increase the demands on the grid, as well the rapid growth in renewable energy generation sources such as wind and solar which deliver a more unreliable and intermittent electricity supply than fossil-fuelled power stations.

Ofgem figures show that in 2006, wind and solar generated 1.2% of Great Britain’s electricity.

Last November, the capacity of renewable energy overtook that of fossil fuels in the UK for the first time, research from Imperial College London has shown.

In the past five years, the amount of renewable capacity has tripled, while that of fossil fuels has fallen by a third, as power stations reached the end of their life or became uneconomic.

However, while fossil fuel power stations can change output to meet demand, renewable energy sources are unable to do this, says Chris Cox, Cenex head of energy systems and infrastructure.

“The growth of low carbon decentralised electricity generation means the grid system will need to change,” he adds. “Smart charging and V2G really do offer part of that solution.”

Smart charging enables energy companies to incentivise vehicle owners to opt into a programme that allows the supplier to curtail charging when energy demand is particularly high.

With V2G technology, when demand exceeds supply, the electricity stored in vehicle batteries can be returned to the grid, with the batteries charged when supply outstrips demand.

This currently provides two main streams of income through selling electricity back to the grid: firm frequency regulation (FFR) and arbitrage.

The purpose of FFR is to maintain the stability of the system-wide alternating current (AC). It does this by supplying extra electricity to the grid when not enough is being generated, and drawing electricity from the grid when there is a surplus.

Arbitrage refers to the application of energy trading strategies within an electricity market environment, where the operator aims to buy energy from the grid at a low price (such as on an Economy 7 tariff) and sell it back to the grid at a meaningfully higher price.

At the moment, FFR is the most lucrative of the two revenue streams, according to Greg Payne, modelling and simulation lead at Cenex.

This currently pays around 50p per kWh. To earn £100 a year, a battery would have to discharge the equivalent of 950km (594 miles) of driving.

Through arbitrage, however, an EV could currently earn 3.8p per kWh, meaning that to generate the same amount of revenue a battery would have to discharge the equivalent of 12,500km (7,812 miles) of driving.

This, obviously, could have ramifications on battery degradation.

Further analysis from Cenex has shown that a domestic customer who has an annual electricity bill of £941 could reduce that by £186 through V2G technology.

Its model assumes the driver plugs their electric vehicle in when they get home from work and unplugs it when they leave the following morning.

It estimates that switching to Economy 7 would raise the bill by £34 if no other action was taken.

Adopting smart charging would ensure that the vehicle was charged during the cheaper tariff rate and would save £98, and earn £12 from grid services. This saves the householder £76 compared with their original bill.

Moving to full V2G with grid services would create additional revenues of £110, meaning the householder’s original bill is cut by £186.

While on its own this figure could be tempting to fleets which operate a number of EVs, the cost of the V2G unit needs to be taken into account.

“It is never going to be a £5 box, but I don’t think cost will be the biggest barrier if the business case for V2G can really be set out.”

The potential revenue will also be affected by the length of time a vehicle is plugged into the grid. In Nuvve’s trial in Denmark, the EVs were typically being driven between 7am and 4pm, and plugged in outside these hours.

“The ideal is that you want the vehicle parked for as long as possible,” says Mullen. “V2G is not necessarily for you if you are using your car except for one or two hours a day, because you need that dwell time.”

While an organisation could make a business case for the technology based on current figures, adopting V2G for its earning potential is not without its risks.

A number of companies are developing stand-alone electricity storage batteries specifically to smooth out the supply/demand peaks on the grid, but Cox says a bigger threat comes from saturation of the market.

“FFR is not fixed price, it’s a competitive market,” he adds. “And so if every vehicle becomes electric and then every vehicle is plugging in at similar times, you are not going to earn the same money.

“FFR will drop to a relatively negligible value. We’ve seen that in other grid services already, and you will have to start looking at other less lucrative value streams.

“However, for the first adopters, there is a huge opportunity. If you look at the business cases, I think we will see there are niche customer types that are able to offer services like frequency regulation much more effectively, and therefore access that vacuum.

“Others with more intermittent or more variable driving patterns will not be able to access the higher values, so will get lower values from it.”

Will batteries be able to take the strain?

The long-term effect of using V2G technology on an electric vehicle battery is unknown, although early signs are that any degradation will be minimal.

“A lot does depend on the type of service you are doing, so if you are doing full charge followed by full discharge, then that cycle is going to put more strain on the battery,” says Paige Mullen, European project manager at Nuvve.

“But, typically, if you are working in areas such as frequency regulation, you are doing a small charge followed by small discharge, so even over eight-10 hours, the battery’s state of charge is not changing much. You are not putting that full cycle impact on your batteries.

“In our trial in Denmark we have seen negligible degradation in our batteries.”

In some cases, V2G technology can improve the life of an EV battery.

“Some of the feedback we have had is that actually storing your battery fully charged can be more damaging than what you are doing with V2G,” says Chris Cox, head of energy systems and infrastructure at Cenex.

“Everyone likes to fully charge their phone ‘just in case’, but that is not the best way to store or maintain the battery, and that actually has quite a negative impact on it.

“V2G can regulate that and sometimes even improve battery life compared with leaving it fully charged all the time.”

Groupe Renault has begun the first large-scale pilot schemes in alternating-current, vehicle-to-grid charging in electric vehicles. The schemes will be run in the Netherlands and Portugal.