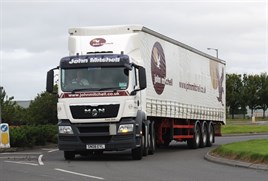 John Mitchell started in 1956, with one second hand Albion lorry operating from Grangemouth in central Scotland.

Over the years, the business expanded and in 1973 moved to a purpose built three acre haulage depot in Grangemouth. At the beginning of the 21st century they purchased a further seven acres of land, adjacent to their Earl’s Road headquarters and began to develop the site into a state of the art transport base, including a new 30,000 square foot warehouse. The Company is still family owned and managed by Iain Mitchell.

Now running just over 100 vehicles (including skeletals for container transport, tankers, rigids and curtainside trailers) and working for over 30 different customers daily, Mitchells complete a variety of general haulage, delivery & loading operations nationwide - starting and finishing in Grangemouth each day.

Over 6 years ago John Mitchell was one of the first adopters of the MAN Trucknology System– based upon Microlise’s Telematics & Tracking unit and its core transport management software suite. With the Microlise Tracking Unit (MTU3) installed and connected to the vehicle’s CANbus, the host system includes the following Microlise modules:

The main business drivers for John Mitchell implementing the Microlise system were to:

Improve communication with their drivers and reduce the usage and cost of phone calls, Iain Mitchell, John Mitchell’s Managing Director, commented “We were one of the first to implement a system like Microlise’s in the area, we took a lot of convincing to the benefits of telematics. Over the years we have seen massive improvements in the way we run our operation; the partnership between ourselves, MAN and Microlise has developed and progressed beyond our expectations.”

The operation uses messages sent by right clicking on a vehicle or driver in the Transport Management Centre or Map client to send messages to individuals or groups of drivers.

As a result, Mitchell’s have dramatically reduced their phone bills by 80% since implementing the system.

The traffic office uses the Map Client to monitor the location and status of vehicles on trips to identify any schedule adherence issues as well as the Map Client’s journey playback facility to debrief drivers on specific issues and exceptions as required.

“Our traffic office and planners couldn’t go without the system now, it’s fantastic and miles above and ahead any other.” Iain stated.

“With our operation type and terrain, we are more than happy with this level of fuel consumption, the drivers can relate to these reports, and are really responding well after a pessimistic reception to the system at first” commented Angela Martin, John Mitchell’s System Administrator.

Over the coming months, John Mitchell are looking to add some of the more advanced features of the Transport Management centre, including the Microlise Electronic Traffic Sheet (which allows them to manage all routes, be they fixed routes, created and managed within the TMC, or imported from a 3rd party routing and scheduling package) as well as other modules, such as the Arrivals & Departures boards and Journey Debrief (which automatically highlights schedule and route exceptions against plan, delivery exceptions and driving style problems in one single web portal.