‘Mobility is the direction for all fleet managers’, says LeasePlan boss 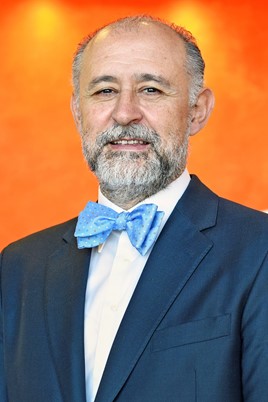 Last year, for the first time in a decade, LeasePlan was dislodged as the UK’s second biggest leasing company in the FN50. It grew, just not as quickly as those around it.

Size matters, especially for new UK managing director Alfonso Martinez – though his doctrine is ‘not size at any cost’.

Nor does he particularly like the term ‘leasing company’ – more later.

Martinez was appointed to his new position in January after 13 years with the company, which included roles as chief financial officer at LeasePlan Spain and MD at LeasePlan Italy.

The move to the UK was “a great opportunity business-wise”, although he candidly admits it wasn’t necessarily his first country of choice.

“I’m a man of the mountains,” the bewhiskered and bow-tied Spaniard tells Fleet News, although his view of the UK’s countryside has softened over the five months since his arrival.

“I’ve travelled 10,000 miles already going to Wales and the Lake District looking for the mountains,” Martinez says. He liked what he found: “You have some great mountains – I hope you appreciate them!”

The business draw was to run one of the biggest markets for LeasePlan. He’s still in “learning mode”, but has already made his mark, both in what he’s done and what he hasn’t done.

“Most new managers, when they arrive, tend to change their team; they are looking for their own people, people they trust. And that especially happens if the business isn’t doing well,” says Martinez.

“My philosophy is that, whether the team is doing a good job or not, they should be shown respect and given the chance to do their best. So the team here is exactly the same as when I arrived.”

He’s delighted with what he’s seen so far. Predecessor Matt Dyer was doing “an excellent job” and the team has “a lot of passion for the UK business”.

One thing has changed or, more precisely, been introduced. In addition to the weekly board meetings, Martinez now meets with a selection of employees (different people each week) in his office for coffee and a chat – although he’s switched from Italian coffee to English tea: “I’m too used to real expresso!”

He explains the rationale behind the weekly meetings: “I want to get their inputs and to be challenged by them. There’s this passion and if we put it in motion, we can untie all the potential.”

The UK is unique among European countries, in some ways more mature; in others, less developed.

Take Martinez’s biggest bugbear. “In the UK, people talk about us as funders. Yes, we fund the car because we are good at it, but we are a service provider, with the car as a service.”

He points to LeasePlan Go, which launched in 2012 offering total service packages to SMEs and individual drivers. The marketing line is ‘you do the driving, we do the rest’.

“That’s a good motto for our customers when they think about LeasePlan.”

In other words, let LeasePlan take care of all your fleet management requirements. Perhaps that’s why some dedicated fleet managers are reluctant to move beyond the view of leasing funders – self-preservation.

Martinez believes they have nothing to fear from working more closely with LeasePlan, but stresses that they need to understand and embrace change.

“The fleet manager role is evolving; it’s nothing like it was 10 years ago. In many companies I’ve experienced on the continent, they are mobility managers taking on the overall travel needs of the business,” he says.

“There will always be a need for someone in this role. We play the fleet manager because that’s what we do, but they have a strategic role. To make strategic decisions, you need a specialist and, for that, you need someone within the company that has the knowledge. We can consult and trial new things, but an internal fleet manager is key to ensure the company has the best solution.”

However, he adds: “The mobility manager is the clear direction for all fleet managers – they can’t just think about the company car. The Netherlands and Belgium are furthest ahead; in the UK it’s still embryonic. But different cities have different solutions. When I’m in Rome, I use car share; in London, I use the tube and buses.”

It’s not just the role of the fleet manager that is changing; LeasePlan is also having to move with the times by developing new services and products. It has a dedicated group based in Amsterdam that is working on digitising the customer journey.

They are mapping the different experiences that customers and drivers have when dealing with LeasePlan, assessing touchpoints such as helping to choose the best car, keeping them safe on the road, vehicle de-fleet and management information.

LeasePlan wants to shift the focus from a process whereby the emphasis is on creating a lead and delivering a car to one that defines the type of customer and tailors the approach to their needs. It is starting to test these customer journeys with a number of European fleets, including in the UK.

“The world is becoming digital and the car is going from property to subscription and to usage,” Martinez says. “It will be a different cloud of services you will be able to take and LeasePlan wants to be in all of them.”

He points to the challenges of ultra-low emission and clean air zones which require last mile delivery solutions. “We have to have the solutions.”

LeasePlan is advantaged when it comes to “integrating many services over the life of the car and taking out the risk”. However, it does not have the large compounds to facilitate swopping of cars.

“But we can be the one that provides the service – we will have a big role to play,” Martinez says.

“We have corporate car share, flexi products and trials with customers on road assistance using data for predictive maintenance. We are running AI (artificial intelligence) in our data hub to find these things so, in the future, we can tell a delivery company if a vehicle is likely to break down in advance.”

One of his business priorities is to get customers integrated into the DNA of everything LeasePlan does – its people, processes and systems. He’s also focused on people development, giving his own staff ownership and empowerment.

“They have to feel good because what they are doing has meaning,” he says. “It’s the people that will grow our business.”

Sustainable growth is his business mantra, with opportunities ranging from smaller fleets to large corporations looking at alternative solutions such as affinity schemes for cash takers.

“Size matters – we have to have the proper size to be efficient – but not size at any price,” he says. “Where there is pressure on price, sometimes it is not worth the effort. Some players could do it; they charge £100 for a service that costs £150. I will never do that.”

Telematics has important role to play

Telematics is still misunderstood by many in the UK, particularly drivers, according to Martinez.

“We have customers saying I don’t want you to know where I am – well, neither do I!” he says. “We can do it (the analysis) with make and model; we don’t need to know who the driver is. We can tell them what we see so they can do something about it.”

Information includes engine idling and type of mileage – urban, rural, motorways. “If they want to save fuel, they have to measure fuel usage so they can drive educational campaigns.”

In Italy, 99% of LeasePlan’s fleet is fitted with telematics which links to insurance reports and maintenance history for a rich seam of data.

“Telematics is part of our offer in the UK but privacy is an issue still,” Martinez says. “In Italy, we put it in the vehicle for crash, theft and diagnostics unless they say no. I would love to do the same in the UK.”

Martinez welcomes complaints. He used to receive them while managing director of LeasePlan Italy as enterprising dissatisfied customers tracked down his work email address.

“I used to find out what was going wrong,” he says. “And when things do go wrong, having a complaint is amazing. We are professionals; we shouldn’t take things personally.

“They are human beings so I ask our people to imagine we are that person so we can understand their position and then fix it in the best way possible and learn from it.”

He adds: “You always learn more from your mistakes than your successes.”

9 things you need to know about Government Mobility

Andrew Ryan looks at the principles of Future of Mobility: Urban Strategy report and their meaning

Private equity firm TDR Capital, part of a consortium of investors which owns LeasePlan, is in advanced talks to buy BCA Marketplace in a deal which would value the remarketing company at £1.9 billion.