Limousine and chauffeur show: Limos show off world of luxury

Was this article useful?
Click the thumbs up >
THE hottest stretched metal took pride of place at Sandown Park Racecourse as the first Limousine and Chauffeur Show hit the UK.

Close to 4,000 visitors from fleet, the motor industry and the public had the chance to see the latest developments in the world of luxury travel during the two-day show.

It was the first time Europe had hosted such a show, normally the preserve of the US, and the event brought a mix of American limo manufacturers and desirable executive cars from all over the world.

Some 40 exhibitors took part, including Binz UK, the National Limousine Association and Limo World UK, as well as mainstream car makers such as BMW, Volkswagen, Mercedes-Benz and Maybach.

Show organiser and editor of Chauffeur magazine Paul Gibson was surprised by the interest shown.

He said: ‘We knew it was going to be a popular event but 4,000 people in two days was excellent. ‘There was so much business to be done at the show, it demonstrates how much the industry is growing.’

Gibson said the world of limos was rapidly diversifying, from ‘night-on-the-town’ stretched Hummers and Chrysler 300Cs to executive refinement at the top end of company fleets with models such as the Binz stretched Mercedes-Benz, the Volks-wagen Phaeton and the new long wheelbase Audi A8 3.0 TDI quattro. And it was the Audi that made one of the weekend’s biggest splashes, winning Chauffeur Car of the Year as voted for by the show’s organisers.

Liz McConnell, specialist sales manager for Audi business sales, said: ‘The level of interest in Audi made it an extremely worthwhile venture for us, especially as we also beat some pretty exalted luxury cars to an award judged not only by respected authorities in the chauffeuring industry, but also by professional drivers.’

The other main award was for Limousine of the Year, which went to the ‘Joker’ Hummer H2, created by Hirelimo. The Joker is worth more than £150,000 and is equipped with a glitzy casino interior complete with blackjack table and an ear-destroying sound system.

Among the guests at the event was US celebrity entrepreneur and icon of the limo world, Limo Bob. He holds the Guinness World Record for the longest limousine, measuring a staggering 100ft. Decked out in his trademark array of gold jewellery, Limo Bob was on hand to provide his expertise for prospective limo owners.

If Porsche’s Cayenne isn’t big enough, then just add a few feet to the middle. Three of these models were sold within half an hour of the show opening.

This E-class is the only stretched Mercedes-Benz to pass a Euro Ncap crash test with five stars. Built by British firm Binz, it features all the safety features of the original car, but fits in an extra row of three seats. Each car is built to the customer’s specifications with full Mercedes-Benz approval. The Saudi royal family owns several

BMW gave the Limousine and Chauffeur Show an extra edge of exclusivity by unveiling a new long wheelbase version of its 730d. Also on show was the 5-series. 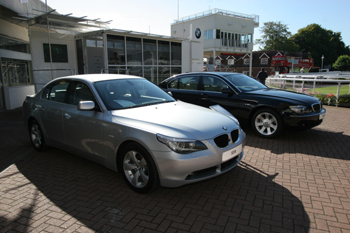 Audi hopes its new long wheelbase A8 3.0 TDI quattro will be a major presence on chauffeur fleets. It was named Chauffeur Car of the Year by the show’s organisers.

Hummers are the already the huge car of choice for Premiership footballers, so to take things a step forward requires some serious welding. This version could house a whole team.

Anything you can do... The Joker Hummer H2 takes the customisation of these military-based machines even further, even adding supercar-style scissor doors.

Ladies who want to travel in luxury – and want people to know about it – could do far worse than this bright pink stretched Lincoln Town Car.

Chrysler’s 300C already has an imposing presence. But with another couple of metres added to the middle, it is an even more intimidating presence. Just try to avoid mini-roundabouts.