Was this article useful?
Click the thumbs up >
SOME of the simplest tasks drivers carry out in cars, including tuning the radio, could be the difference between keeping safe and crashing, a Fleet NewsNet investigation has revealed.

The shocking result of the research into the effect of distractions on drivers shows how their ability to respond to emergencies is drastically reduced, which in turn sends stopping distances soaring.

Tests covering areas from mobile phone use to eating at the wheel revealed reaction times slowed in some cases by more than 90%.

As a result, emergency stopping distances increased in some cases by more than 20 metres at 60mph – the length of two double-decker buses – which on the motorway could mean the difference between stopping safely or hitting the car in front – hard.

Fleet NewsNet carried out its tests using the British School of Motoring’s (BSM) driving simulator to assess how reaction times are affected by varying distractions.

BSM uses driving simulators to help train drivers because they are able to put motorists in emergency situations they might face on the road.

The simulator, modelled on a Vauxhall Corsa, has a clutch, brake and accelerator, gearlever, steering wheel and a series of controls the same as any vehicle.

The only difference is that drivers stare at a computer screen rather than the open road. I travelled at varying speeds on the simulator and then performed an emergency stop when a signal flashed on the screen.

At first, the emergency stop was completed with full concentration. Then, it was re-assessed using different distractions. Even the most basic distractions led to an increase in stopping distances, as our results show.

THE simulator did not have a satellite navigation unit or a car stereo but it did have a selection of switches on the dashboard. When using these switches, for example to turn on the lights, reaction times were 93% worse when travelling at 60mph. This was by far the worst distraction we tested.

RoSPA produces set criteria for drivers using satellite navigation systems. It states: ‘The device should not provide an unnecessary distraction and any settings should not be changed while the vehicle is moving.

‘As the device will be informing you it should be within your field of vision, and you should also make sure you understand what the icons mean so that it can be read quickly without taking your concentration away from the road for too long.’

The monotony of driving can also lead drivers to distraction according to Andrew Howard, head of road safety at the AA Motoring Trust.

He said: ‘Drivers can end up being so bored when driving that they look for something to distract themselves, such as the radio. We even have complaints about roadside advertisements causing distraction.’

He suggested that something as simple as listening to traffic reports on the radio and working out whether it affects you could take your attention off the road. 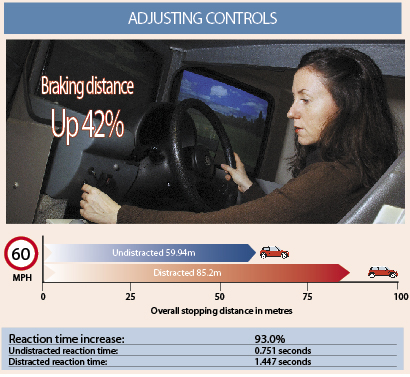 DRIVERS are dicing with death if they ignore the current ban on using a hand-held mobile phone while driving, our research reveals.

While taking a call on a hand-held mobile phone, the reaction time to an emergency increased by 53%.

Despite this representing a fraction of a second before hitting the brake pedal – rising from 0.660 seconds to 1.103 seconds – the overall stopping distance leapt from 32.1 metres to 39.1 metres, enough to drive over a pedestrian crossing.

This provides clear backing for the Government’s decision to ban the use of hand-held phones while driving, but commentators point out that unless the law is rigorously enforced, it will have little effect. According to a study completed by the Royal Society for the Prevention of Accidents (RoSPA) at the end of last year, the use of hand-held phones while driving has only reduced by 25% since the ban came into force.

RoSPA has welcomed news of increased penalties for drivers using hand-held mobile phones while driving, with the addition of three penalty points, while the fine doubles from £30 to £60.

Kevin Clinton, head of road safety at RoSPA, said: ‘In the meantime, we want police to take action against everyone they see using a hand-held phone at the wheel.

‘They should run specific campaigns targeting mobile phone users who ignore their own safety and that of the people on the roads around them. Some people still think that their phone call is more important than someone’s life and they should not be allowed to get away with it.’

But the mobile phone law need policing. In New York, a year after a ban on hand-held phones at the wheel was introduced, usage had fallen by 50%. A year later it was back to pre-law levels.

SOME drivers even try to send text messages while driving to avoid speaking on the phone, but our research shows this is even more dangerous than taking the call. The reaction time to an emergency situation while sending a text rocketed by 57.7% and as a result the stopping distance jumped by 43.5% to 46.1 metres at 40mph.

On the road, the extra 10.4 metres this added to the stopping distance would cover the length of a double-decker bus.

THERE was a national outcry when a driver was fined by police for eating an apple at the wheel, but our research shows why they decided to act.

We replaced the apple with a packet of crisps and saw an increase of 29% in our reaction times, which pushed up our stopping distance by 13%.

At 60mph, this was equivalent to 7.56 metres, again almost the length of a double-decker bus. Limited research has been completed on driver distraction and some of the UK’s safety organisations are calling for more to be completed.

A spokesman from RoSPA said: ‘We would like to see more research into the whole area of distraction. We are concerned that cars are becoming more like mobile offices when driving with some people even having fax machines inside the vehicle.

‘It is important that fleets have clear policies including those on distraction.’ 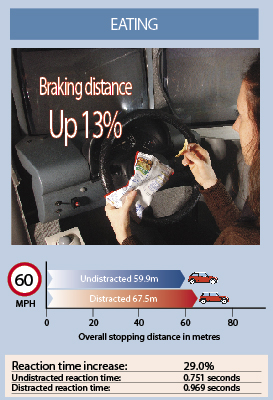 ON long motorway journeys or just before drivers reach their destination, many will rummage in a bag or coat pocket looking for an important document or piece of information.

According to our research, if a pedestrian stepped out in front of you or the car in front suddenly stopped, it would take more than 10 metres longer to stop, despite the reaction time only increasing by milliseconds. 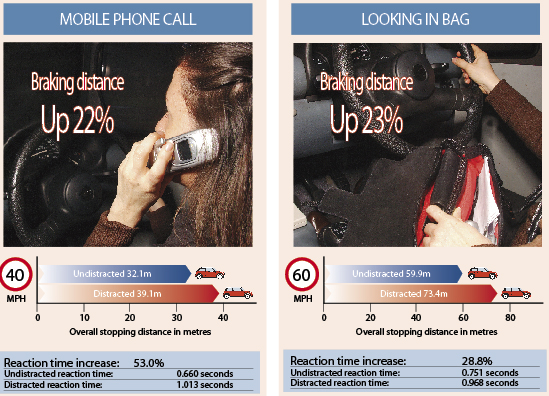 The human cost of taking your eye off the road

IN 2001, a driver who caused an accident in which three people died was jailed for 90 days and banned from driving for three years.

Dr Thomas Munch-Petersen lost control of his car while searching for a sweet in a jacket draped over his passenger seat, the court heard. Two men and a pregnant woman died in the pile-up caused by his car veering from the overtaking lane of the motorway.