Was this article useful?
Click the thumbs up >
FORD is hoping fleet customers will be proud to put their names on the side of its new Transit.

First pictures show that the new van features a nine inch wide Ford badge – the biggest on any European Ford and reflecting Ford’s own pride in Britain’s best-selling van.

Gary Whittam, commercial vehicles director, Ford of Britain said: ‘Existing customers will love the new Transit. The new styling and dynamic changes will ensure that many new customers who take pride in their business will also take pride in placing their name on the side of a new Transit.’

The new van will make its public debut at the CV Show in April before going on sale in the summer. 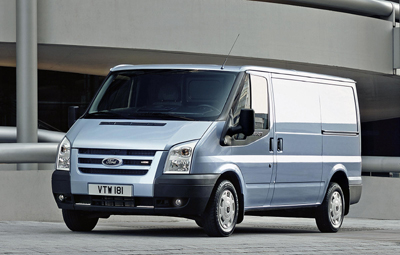 It features a fresh front end, a redesigned interior and seven all-new engines and will still be built at Ford’s plant in Southampton. Exterior design changes give the vehicle a ‘stronger, more contemporary profile’ according to Ford. The new three-bar grille sits between new, more vertical headlamps.

Inside there is a completely new dashboard, instruments, switches and a new steering wheel, while the gearlever moves up to the dashboard. The Transit will feature a range of distinctive new colours, as well as new-style wheels, wheel trims and exterior trim detailing.

The new range will offer six diesel engines and one LPG-compatible petrol engine. The diesel options include new 2.2-litre and 2.4-litre TDCi diesel engines, matched with either five-speed or six-speed transmissions.

Whittam said: ‘Transit led the market once again in 2005 with 54,300 sales, outselling the nearest rivals by more than three to one. The new 2006 Ford Transit takes its strengths and advances them.’