Opinion: In search of the Holy Grail - project management success

Was this article useful?
Click the thumbs up >
PROJECTS fail – some spectacularly – and, looking at project management stats, if you were a betting man you wouldn’t lay money on their successful delivery. But is failure inevitable? Are project managers doomed to spend their careers in a never-ending groundhog day of disaster?

"Project failure is not discriminatory – it pretty much affects all sectors and all countries in equal measure. Whether it’s the embarrassingly late delivery of a Departments of Defence announcing that they have spent millions on helicopters that aren’t safe to fly, or contractor featured in a recent scathing report that had only completed six out of the 150 health centres it was supposed to be building in Iraq, despite having already spent 75% of the $186 million budget.

Louise Cottam, a senior project manager who works in the food, nutritionals, pharmaceuticals and medical devices industries comments: ‘I’ve seen the same failure modes across all the industries I’ve worked in – in fact some of the worst projects I've experienced were within consulting or project management divisions, although the goals and products might be different, failed projects share many common characteristics’.

And it’s not like we don’t know why projects fail. After all, hundreds of thousands of words have been written to document and analyse the causes of project failure.

There are also statistics galore, showing just how very bad some are at delivering projects on time and to budget; while many, many more words have been written to describe features of successful projects and to promote a variety of methodologies that are claimed to improve success rates.

Yet still the Holy Grail of successful project delivery seems to slip from our grasp.

Neither is this an inconsequential issue. The consequences of project failure can be catastrophic – failed projects bankrupt businesses, generate humiliating publicity which devastates investor confidence and slashes the stock price, help to bring down governments and soak up huge sums of money that could be better spent elsewhere. In the worst cases they kill people.

IT and telecoms industry stats are particularly grim and are expected to become worse. The daddy of all IT project failure studies is the Chaos Report by the Standish Group. It’s Standish that are behind the often-quoted figure of 70% failure rates for IT projects, which is even more worrying when you consider that their definition of failure is 100% overrun on time or budget.

Scarily, in the ten years since the initial study, little seems to have changed. Indeed some industry observers comment that they may even have got worse. Standish stats show that 31% of projects are cancelled before completion, 88% exceed deadline, budget or both, while average cost overruns are 189% and average schedule overruns are 222%.

When you consider that these projects have knock on financial effects – such as lost business, lost stock value and the requirement to compensate customers – the numbers quickly become unimaginable. The problem is also increasing exponentially due to the number of IT megaprojects as large governmental organisations automate processes and connect disparate systems. One example of a current megaproject is the UK’s National Health Service project to automate health records, which it is estimated will cost at least USD65 billion.

Everything is not as it first appears; critics of Standish statistics and other surveys point to the fact that the root cause of overruns lies in poor scoping and requirements captured at the start of the project.

Peter Bowen, a senior consultant in the telecoms industry explains: ‘Many companies chronically underestimate the cost of running a project or how long realistically it will take to deliver. Scope creep adds to this problem, with companies failing to understand how much extra time and money adding that nice-to-have feature will cost them. Of the hundreds of projects I have reviewed, the most common problem is the failure to meet expectations.

In fact executive pressure to bring projects in as cheaply as possible often means there is little incentive to identify the true cost or realistic timescales at the start. Doing so would mean that many projects would simply never get off the ground.

The key to success lies with human issues such as good communication, realism and truthfulness, and creating trust with your employees, with other project staff and with the customer. Our differentiator is the quality of our people.

Formal methods are useful, but they simply do not work out-of-the-box in the real world. You have to be prepared to adapt to the environment and culture, taking what you need from methodologies. You also have to be prepared to review and learn from your mistakes – constantly evolving your approach to make it more effective. Getting the approach right is also important.

While there has to be accountability in projects, a finger-wagging blame culture is counterproductive. Things go wrong and people make mistakes. Success comes from being fair but firm, and earning trust so that people will tell you there is a problem. If your staff trust you enough to tell you they’re worried about something then that gives you chance to fix it. Blaming is easy: being solution-oriented and constructive is much, much harder." 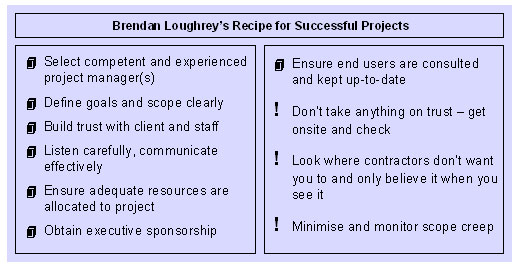