Our fleet man is ICFM Trainee of the Year

Was this article useful?
Click the thumbs up >
UNLIKE many student stereotypes, he doesn’t exist on a diet of Pot Noodles, sit in his underwear watching daytime TV or balk at the cost of unsubsidised beer.

No such laziness or indolence for our own John Maslen – who has become an ace fleet student.

Fleet News supplements and events editor Maslen went back to school, taking the Institute of Car Fleet Management’s Introductory Certificate in Car Fleet Management, and promptly went to the top of the class. He was announced as Trainee of the Year at last week’s ICFM Conference.

John, who took the course to better understand the industry and the challenges that face Fleet News readers, received his award from outgoing chairman Tom Madden.

James Langley, ICFM deputy chairman and chairman of the training and education committee, said: ‘What’s truly outstanding is the quality of his job-based assignment. It is comprehensive, well-written and will have required a significant investment of time. He has without doubt taken it very seriously and lived up to his commitment.’ 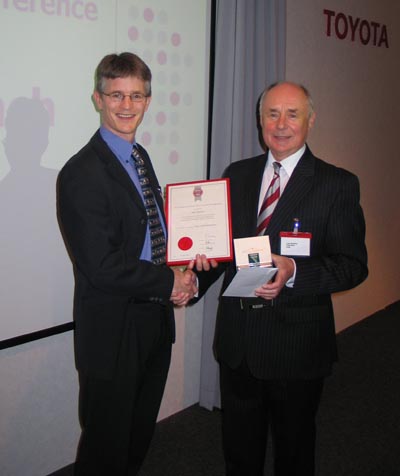 John Maslen receives his award from Tom Madden. Martyn Moore, editor of Fleet News, said: ‘We are very proud of John. His award was hard-won and recognises his commitment to readers. It also demonstrates the importance Fleet News places on industry knowledge. Our writers’ credentials are impeccable.’