ICFM: Effective co-ordination is a must

Was this article useful?
Click the thumbs up >
GOVERNMENT moves towards road charging should not go ahead until clear standards for the technology have been laid down, according to a leading fleet manager.

Damian James, head of transport provision at Bracknell Forest Borough Council, fears that without effective co-ordination, national road-charging schemes could lead to fleets having to manage a range of different systems.

Currently, London has a system based on numberplate recognition technology, but there are other favoured systems using radio transmitters in cars.

These automatically pay for road use when they pass key checkpoints.

James said manufacturers could help by installing a standardised black box device on the production line.

He added: ‘Without proper partnerships, businesses could end up with so many ‘black boxes’ in their vehicles drivers won’t be able to see out of the windscreen.’

New faces at the top

A SERIES of changes at the top of the Institute of Car Fleet Management were announced at the conference.

Fleet News has already revealed that Roddy Graham, commercial director of Leasedrive, had been appointed as chairman, replacing Tom Madden.

Roger Glenwright and Eddie West will also be stepping down from the committee.

The two vacant positions will be taken by Sara Cook, fleet manager of of BSkyB, and Sara Wisnieswski, fleet services manager of Yell.

MICHELIN is calling for a new banding system to be agreed for tyres based on their rolling resistance to show how they could impact on fuel economy.

The system would range from low to super-low emission tyres and encourage drivers and fleet managers to consider the effect tyres can have on vehicle fuel economy and emissions.

Steve Dolby, Michelin product marketing manager, said: ‘Using low rolling resistance tyres can cut fuel use and help the environment. Green issues are of increasing importance to fleets and tyres need to be part of that debate.’

Award-winners hail the value of training

AWARD-winning fleet managers (see pic below) have praised the benefits of formal training as being a key factor in their success.

Hallam said: ‘Training gave me the recognition and confidence to talk to all management levels in the industry and I feel it gave me better promotion prospects. I believe training is vital to the success of fleet managers.’

Dickson, who received the Fleet News Platinum Award, took the ICFM Diploma course in 1998 and described it as a ‘catalyst for lifelong learning’. 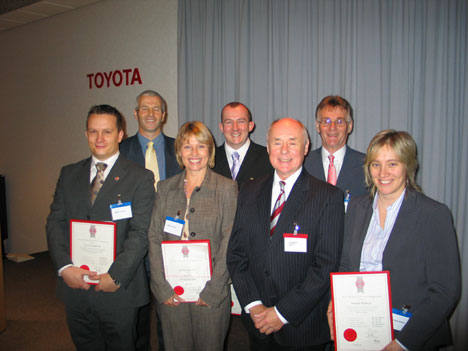 Details of ICFM courses are available by logging on to www.icfmonline.co.uk.

Costs slashed by use of technology

EFFECTIVE use of software by a fleet manager has slashed invoice queries on her fleet from 150 a month to zero.

Claire Walker, compensation and benefits manager at mobile phone provider Caudwell Logistics, claims technology has transformed the firm’s operations and slashed administration costs, which in turn has saved thousands of pounds for the company.

Caudwell operates a fleet of more than 1,300 cars and also has over 300 cash allowance drivers.

Walker said: ‘We have moved online from a paper-based system. We used to have more than 30 spreadsheets covering every aspect of the fleet.

‘It was a nightmare inputting fleet data and also updating staff changes that had originated in HR. Our move to web-based software has reduced an almost impossible workload and all departments, including HR and payroll, are benefiting.’