Was this article useful?
Click the thumbs up >
SUBTLE evolution for new E-class line-up.

SAFETY is the big selling point for the new E-class. It contains many new features to help protect occupants during and after a crash, as well as new technologies to stop the accident happening in the first place.

As well as all the international crash test regulations, Mercedes-Benz carried out many of its own tests to improve safety as much as possible. At the time of going to press, some 330 separate crash tests had been carried out on the new E-class.

PRE-SAFE is a system first seen in the 2002 S-class. It comprises a network of safety systems and uses sensors to recognise a potentially dangerous manoeuvre in its early stages. If it seems likely that the vehicle is about to go out of control, a series of preventative measures are activated.

Should the brake be stamped on, seatbelts are tightened and the electric seats are moved to the safest possible position. In the event of a skid, the windows and sunroof are closed to provide more support for curtain airbags and stop the occupants being thrown from the car.

If the car is hit from behind, sensors activate a headrest system called Neck Pro. The front restraints are moved forward and up on a spring to stop driver and passenger’s necks snapping back and causing whiplash. This is one of the most common accident injuries, and costs the European Union eight billion euros each year. 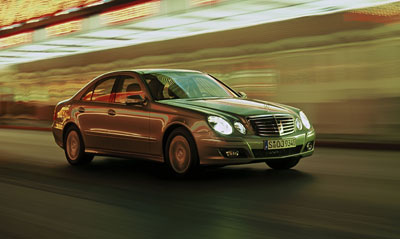 Other innovations on the E-class include side skirt extensions to stop wheels being forced into footwells in the event of a smash.

In the footwells themselves, energy absorbing foam cushions the feet and the side pillars have been strengthened with what amounts to an internal roll cage.

The engine and fuel pump are shut off in accidents to prevent fire, and even the wood trim inside the E-class is backed with metal strips to stop splintering.

THE new E-class goes on sale on July 1 and, although prices have yet to be revealed, expect the cars to cost slightly more than the models they replace.

As before, there will be saloon and estates, with the four-door likely to continue outselling the estate by seven to one.

Some option prices have been revealed – the Intelligent Lighting System will cost £340 for Avantgarde and Sport models and £1,120 for Classic and Elegance trim.

SIX of the 10 engines under the E-class’s bonnet are new or further developed versions of existing units. 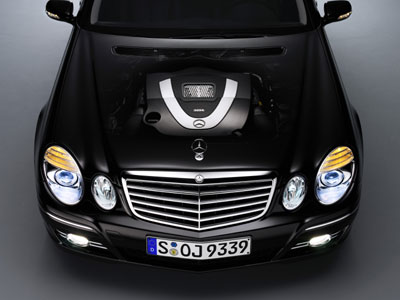 There will be three diesel engines offered in Europe – two four-cylinders in E200 CDI and E220 CDI and the E320 CDI V6.

For the petrol models, the range begins with the E200 Kompressor. This supercharged model now offers 12.5% more power – up to 184bhp.

Further up the scale sees the launch of the 5.5-litre V8 engine first seen in the S-class and SL roadster. With 388bhp this unit is more than 80bhp more powerful than the old 5.0-litre V8.

And it wouldn’t be a new Mercedes-Benz launch without mention of a ballistic, super-powerful AMG version.

For the new E-class, the range-topper is now the E63 AMG powered by a naturally-aspirated 6.3-litre V8 engine which offers 514bhp and 465lb-ft of torque – making it the most powerful E-class ever.

CAR lights have come on in leaps and bounds in recent years. With xenon, halogen and even swivelling headlights now commonplace, Mercedes-Benz has gone a step further with the Intelligent Light System.

The bi-xenon headlamps on the E-class have five different settings depending on conditions. The Country mode increases beam coverage of the offside verge, increasing vision by 10 metres. Travel faster than 90kph and the Motorway mode is activated, which changes the light spread to reach 120 metres ahead across the whole road width.

The fog lights are enhanced by one headlight swivelling independently of the other to light the nearside of the road and improve visibility, while the active light function sees the lights swivel in the directions the front wheels face to improve lighting on bends.

Operate the indicator or steer at below 40kph, and cornering lights are activated illuminating in front and to the side of the car by 30 metres.

Another new addition is flashing brake lights. Plant your foot on the brake hard and the rear lights flash rapidly to warn drivers behind. Mercedes-Benz tests showed that driver reaction time can be shortened by up to 0.2 seconds using the new lights, reducing braking distance by 5.5 metres at 62mph. 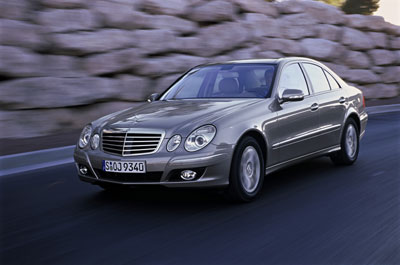