Speeding: the crime we all commit

Was this article useful?
Click the thumbs up >
SPEEDING is one of the most commonly debated transport issues.

Most drivers will have an opinion on it. Some will take the view that no cars should go over 70mph anyway, so why do manufacturers make them so powerful? Others will rage about speed cameras being infringements of their personal privacy.

But whatever the reasoning, the fact is that speeding is commonplace. When was the last time you were out on the road and everyone stuck to the limit? Or the fastest vehicle on the motorway was doing 70mph?

According to Government figures, more than half of motorists average speeds above the 70mph limit on the motorways, and 19% average more than 80mph.

Surely then, if so many people are doing it, speeding can’t be that bad. After all, cars are safer than ever these days and 70mph doesn’t really seem that fast.

The partnership has put together a pamphlet – Nobody Has Business Speeding … Even Yours! – to help companies understand the importance of tackling speeding drivers within their duty of care.

Speed inappropriate for the conditions is, according to Government stats, a factor in more than half of all road crashes.

In the East Coast region of Scotland alone, 100 company vehicles are caught every day – that’s 40,000 a year, and countless more drivers don’t get caught. With business drivers outnumbering leisure motorists across the UK, it’s clear that the fleet industry has to take action.

The ECSCP says that as well as improving safety, encouraging your drivers to slow down can have financial rewards too. As fewer drivers have collisions, insurance premiums can drop.

Slower speeds mean less wear and tear on tyres and brakes, and easing off the throttle consumes less fuel at a time when prices at the pump have never been higher.

When a ticket is issued, it goes to the registered keeper of the vehicle and requires them to give information on the identity of the driver at the time of the offence. You have 28 days to reply, and if you don’t you face prosecution for not naming the driver under the Road Traffic Act 1998.

The law expects you to know who was driving and if prosecuted you face a fine of £1,000 and a criminal record.

All very well, but anyone with fleet management experience knows that identifying a problem and getting drivers to comply with the solution is easier said than done. Asking drivers to slow down out of the goodness of their hearts might not do the trick.

So what would? Advice from the ECSCP suggests you firstly remind all drivers, including agency staff, that speed limits vary for different types of vehicles (see table below).

It may surprise a lot of van drivers to know that if their vehicle is not derived from a car, they should stay below 50mph on single carriageway roads and below 60mph on a dual carriageway. Only on motorways are they allowed to reach 70mph.

Such information can be included in the drivers’ handbooks that employees should receive and read before they can drive for business.

You can also remind them of the consequences of speeding.

Just because they are in a company vehicle and not their own does not absolve them from responsibility for their conduct on the road.

Dangers aside, the repercussions can hit drivers and company alike.

For that reason, it’s not just the drivers’ responsibility to slow down. Many employees claim to speed because of work pressures and tight schedules. 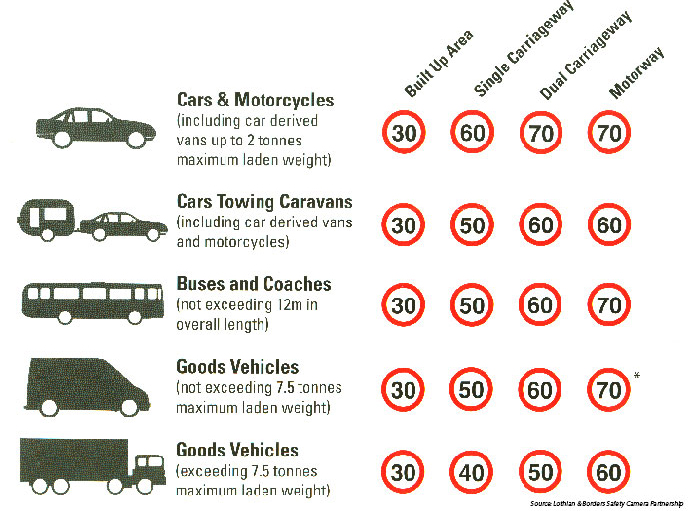 IT is essential that companies do not put drivers in a position where they are forced to speed.

Unreasonable deadlines and schedules, and incentive schemes that reward drivers for cramming in as many jobs as possible, are not only unfair to staff but could land you and company directors in jail.

If a driver is involved in a fatal accident where speed is determined to be a factor, the police can prosecute for manslaughter or even murder.

Fleets with a number of vehicles and drivers that regularly swap between them can easily cover themselves against prosecution for not naming a driver.

Simply set up a log book that each driver must sign when he takes out, or brings back a vehicle. It should contain the driver’s name, date and duration of the journey and all destinations along the way, confirmed by the driver’s signature.

But even when you know who has what vehicle, how do you know who is speeding until tickets start dropping through the door? Technology has now advanced to the point of providing the answer – telematics.

For those unfamiliar with the concept of such electrickery, telematics essentially means monitoring vehicles in real time via a computer.

A black box of sensors and assorted gizmos is installed in the vehicle, and feeds back information wirelessly to a central computer.

The technology is so advanced now that some systems can monitor not just speed, but sudden braking, skids and general driver behaviour.

Some packages offer an alert system that tips off the fleet manager if a vehicle goes above a certain speed. As well as allowing you to keep an eye on drivers that exceed the limit, they build up profiles of the worst offenders and also create an audit trail that helps fulfil duty of care responsibilities.

Lindsay Guy is senior commercial fleet underwriter at insurance firm Norwich Union and an expert on speeding issues in fleets. As far as she is concerned, telematics is a must-have for any firm serious about safety and complying with the law.

‘Telematics data can be used in lots of different ways, both to support the driver in additional training and also to protect the business,’ she said.

‘If you’re not running telematics, you haven’t got data coming through to you. How do you know what your driver is doing? You might have a gut feeling that a driver is breaking speed limits, but how do you actually know?

‘Telematics allows you to identify the issue, discuss and resolve it with the driver.’

Between 3% and 5% of commercial vehicles currently have telematics, but Guy expects that to rise in the next 12 to 18 months.

‘It’s a major issue,’ she said. ‘Perhaps 80mph on a motorway isn’t so bad, but 60mph in a 30mph zone is very dangerous. That’s the beauty of telematics – it allows you to grade the severity of your drivers’ speeding.’

Follow this advice and put a bit of thought into how to control your drivers and their speed, and you can save not just money and a lot of headaches, but lives on the road.

And perhaps your drivers will thank you for saving them points on their licence and even their jobs.

JOHN, a van driver, had just finished a job in Berwick when his boss called and told him to pick up a package from Glenrothes, 91 miles away, and get it to the airport in time to catch a flight to the US.

‘I told him there was no way I could make it in time,’ John recalled.

‘But he just kept saying how important this new contract was to the future of the business – our jobs in other words – so I went for it, got flashed twice for speeding and still didn’t make the flight in time.’

Two weeks later, John’s boss had two Notices of Intended Prosecution drop through the door, asking him who was driving the van at the time.

John said: ‘To be fair, he tried to cover up by saying he couldn’t remember but, of course, it didn’t stop there.

‘When they told him that he could be facing a £1,000 fine for not naming the driver, he had to own up and put me in the frame.’

John had points added to his licence, but there was worse to come, as his boss explained. ‘I never told John to speed,’ he said.

‘I just pointed out that this new contract was really important to us. I tried to protect John by saying I never keep records of who was driving any of the vans at any particular time, but they had the pictures and failure to identify the driver could have put me in the dock with the possibility of a heavy fine or even jail. So what could I do?

‘I was sorry to let John go but, as it’s company policy that all our drivers must have clean licences and he’d picked up six points in less than an hour, I didn’t have any choice. We did pay his fines, though, as a goodwill gesture.’

The case might seem unfair, but perhaps it is worth pointing out to drivers that if they speed, they get the punishment, which could have knock on effects.