Was this article useful?
Click the thumbs up >
A proposal to penalise sport utility vehicles with higher congestion charges was dismissed as impractical at the show.

Phil Popham, managing director of Land Rover, said a threat by Mayor of London Ken Livingstone to hike daily charges to £25 for ‘gas guzzler’ vehicles would be met by increased efforts to supply legislators with facts about car-borne pollution.

He said: ‘This is an emotive issue and we fully understand that. But advanced technology will allow vehicles in the sector that people are berating to become leaders in environmental performance.’

Popham, speaking at the unveiling of the new Freelander, added: ‘Only 10% of emissions come from motor vehicles, and the Government needs to encourage households to be more environmentally friendly. Everybody needs to be more focused on reducing pollution. We’re not getting hung up about Ken – but it would help if more legislators realised that the average fuel economy of Land Rover vehicles is 30.1mpg. That’s more than is achieved by many premium saloon cars – and our new Freelander diesel does almost 38mpg.’

Popham said Land Rover, which sold 49,000 vehicles in Britain last year, took a ‘very serious’ view of environmental issues and was making sure it improved the efficiency of its models. 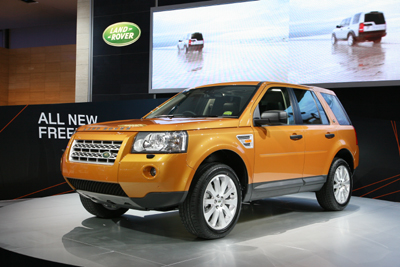