Was this article useful?
Click the thumbs up >
THE large MPV sector hasn’t seen much activity in the past few years. Other than the launch of the Mitsubishi Grandis, the only real action taking place has been mid-life revamps of existing models.

However, things are about to change with the arrival of Ford’s all-new Galaxy.

Designed and engineered by Ford, unlike the previous version which was a collaborative effort with the Volkswagen Group (it was also known as the Alhambra and Sharan), the new Galaxy brings Ford’s new angular family look and a range of excellent diesel engines to the sector.

And, as is expected in this market, it has a flexibile interior featuring fold-flat seats so the car can either accommodate seven people or offer masses of loadspace.

The rivals assembled here are all in entry-level specification, with a turbodiesel engine offering around 140bhp and a pricetag hovering near the £20,000-mark.

The current leader of the pack is Renault’s evergreen Espace, fresh from a mid-life revamp earlier this year and the current holder of Fleet News Best MPV Award. Can the Galaxy put up a challenge?

Key to success is versatility and practicality, with the Grandis scoring well with its seat arrangement. However, it is handicapped by high running costs and inferior drive quality.

The new Galaxy is a huge improvement with much more space, a car-like drive, better interior quality and seat flexibility. Add to this its fuel economy and the Ford is the winner. The Sharan is the oldest model but has weathered well. The compromise between seat capacity and luggage space marks it down.

The French trio offer similar refinement and flexibility, not least the sliding side doors on the 807 and C8.

The Sharan family of MPVs brought a more car-like driving experience and are still great value used. However, the Volkswagen is showing its age, particularly in the heavy seats which have to be removed.

The new Galaxy looks good value but may well be in danger of being overshadowed by the much cheaper and more sporty looking S-MAX.

Like the S-MAX, the Grandis manages to hide its bulk well. Inside the lower stance does not compromise accommodation – it’s a true seven-seater.

The Espace has more style than the average MPV.

The C8 and 807 don’t have the visual appeal but the diesels are competitive.

Fleet sales account for 60% of large MPV purchases, but demand and secondhand values are dropping with many drivers migrating towards more affordable, less cumbersome cars such as compact MPVs.

In terms of style, safety and innovation, the Espace is a cut above the rest. But for overall appeal, the Galaxy comes up trumps. It is a popular all-rounder and will continue to build on its success.

Although the Galaxy’s rental is high, this is compensated by the best residual value, lowest CO2 and fuel economy. It also shares the lowest insurance group and maintenance costs won’t break the bank.

IF you need to carry seven people you’re spoilt for choice, especially now that off-roaders are getting in on the act, too, but that doesn’t mean the MPV is fading in popularity.

The Espace is still our choice. It remains the MPV to beat and this is reflected in the monthly lease rates which makes it great value.

Despite costing slightly more than some of the competition, the Galaxy gets our second place because of its versatility. The rest of the pack are much of a muchness, although the Grandis brings up the rear as it is notably more expensive to lease due to the lack of manufacturer support and its higher servicing costs.

PLENTY of support from Renault helps the Espace to the lowest monthly rental rate. Ford and Mitsubishi are less generous, reflected in their cars having the most expensive lease rates.

THE Grandis and Sharan share the same engine, although the Mitsubishi’s gearing gives better fuel economy. Once again the Ford is out ahead thanks to its 2.0 TDCi turbodiesel engine.

AS befits its status as the newest model, the Galaxy has the highest RV forecast. And despite being one of the oldest models on test, the Sharan remains a desirable used car thanks to the Volkswagen badge.

FORD and Mitsubishi are the least generous with support – this is because the Galaxy is all-new, while the Grandis is sold in much smaller volumes. Renault offers the most support, with 30% off the Espace.

THE Grandis shares the same 2.0 TDI engine as the Sharan, but the Mitsubishi needs servicing every 9,000 miles, whereas the Sharan can go up to 20,000 miles, which is reflected in the cost.

VERDICT: Offers the best fuel economy and lowest emissions, but has a high rental due to a lack of support from Ford. Has the best RV in the sector, though.

VERDICT: Plenty of discount from Renault sees the Espace offer the lowest monthly rental bill. Been around for a while now, but still a tough package to beat.

VERDICT: Even though it’s been around for a while, the Sharan still commands a strong residual value. This helps it to fourth and a low monthly leasing rate. 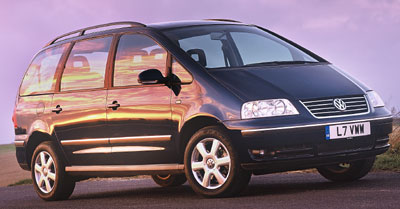 VERDICT: Even though it’s been around for a while, the Sharan still commands a strong residual value. This helps it to fourth and a low monthly leasing rate. 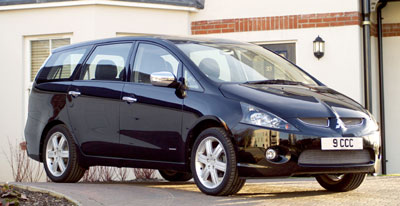 VERDICT: By far the highest servicing costs and a lack of support from Mitsubishi condemn the stylish Grandis to a lowly finish here. 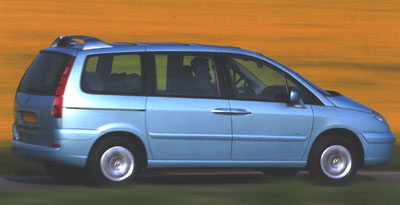 VERDICT: The Citroën has been around a few years, and its low residual value prediction reflects this. The rental rate is competitive, though.