Was this article useful?
Click the thumbs up >
THE Volkswagen Transporter was given the ultimate honour of Best Van 2.2-2.8 tonnes gross vehicle weight at the 2006 Fleet News Awards in March. And in my humble opinion it was well and truly deserved.

Now the most powerful variant in the range has joined our long-term test fleet for six months.

The Transporter is not one of those vans that has any pretensions to style and fancy fangle-danglery – it is solid, practical and unfussy, just how a van should be.

In fact, if you go to Germany, you’ll find the word for ‘van’ is nutzfahrzeuge, which literally translated means useful vehicle.

Our 174bhp version is by far and away the most powerful engine in the range.

It’s not going to be the biggest seller obviously, but as a statement of intent to lead the van market, it does the job as a halo model.

As soon as you touch the Transporter, it’s obvious that this van is a bit special.

The doors weigh a ton for a start – they are the sort of thing you’d expect to find nailed on the front of Fort Knox – and everything inside screams ‘durability’ and ‘quality’.

The seats are firm and hard, like most German seats, with height, rake and lumbar adjustment and the dash is solid and functional.

But what’s this nestling in the centre console – a mouldy old radio/cassette player!

Tut tut, Volkswagen, it’s the third millennium now. No-one plays cassettes any more. Our test van has a CD auto-changer under the seat, but how many fleet operators are going to pay £235 for such an item? None probably.

Standard spec is generous for a van. You get a driver’s airbag, ABS brakes, engine braking control, electronic brakeforce distribution, traction control and engine immobiliser. Under the bonnet is a 2.5-litre turbodiesel unit offering 174bhp at 3,500rpm and 295lb-ft of torque at 2,000rpm.

That translates to a top speed of 117mph and a claimed combined fuel economy of 44.8 miles per gallon, although obviously not if you tank along doing a ton. Gross vehicle weight is 3,000kg. 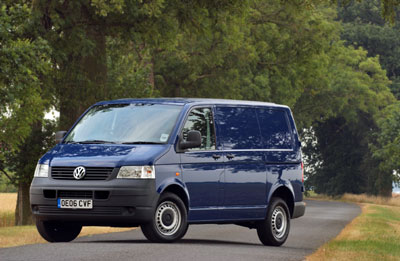 Under way, that dash-mounted gearstick must be one of the slickest there is – it snicks into place without a murmur and is a delight to use. The engine is whisper quiet too, so driver and passengers can converse in normal tones.

The full bulkhead is a definite safety plus but on the minus side it severely constricts the amount of space for the driver’s legs.

The colour is worthy of mention. Officially it is called Inca Blue but the residual value experts called it Doom Blue because apparently dark blue vans don’t sell well at auction.

I quite like it personally but it’s a point worth bearing in mind.

As usual when a new van arrives, there is already a queue at my desk of people wanting to borrow it.

We’ll be reporting on the team’s various views in the coming months.