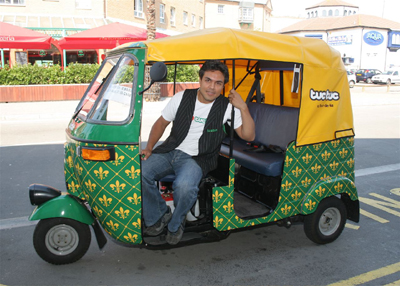 AS FLEET managers, you all know how difficult your job can be looking after cars or vans.

But imagine what it must be like to concoct and run a fleet of vehicles that are the only examples of their kind in the country.

More and more companies are using unusual promotional vehicles, whether converted cars or entirely new vehicles. How do you go about sourcing and preparing a fleet that doesn’t exist anywhere else?

At just 26, Dominic Ponniah is executive director of Tuctuc Ltd, a company he formed to bring a distinctive eastern method of public transport to British shores.

Part rickshaw, part motorbike, tuk-tuks are a common site in countries like Thailand and India, and it was on a backpacking trip eight years ago that Ponniah first came up with the idea.

The plan was put on hold while he was at university, but once he had graduated Ponniah set about bringing a fleet of tuk-tuks to Britain, starting in Brighton.

He faced more challenges than most start-ups. For a start, which make to choose? There isn’t a Fleet Tuk-tuk? magazine to give you advice.

He eventually chose a company in Bombay because it produced a four-stroke model that ran on compressed natural gas (CNG). This fitted in well with Ponniah’s desire to produce a form of public transport that was green as well as cheap and convenient.

A fleet of 12 tuk-tuks were sent over by ship but did not, alas, arrive intact.

‘The vehicles were damaged in transit,’ Ponniah says. ‘It took two months to get them into the country and three months to repair them ready for UK roads.’

The tuk-tuks required considerable work to meet UK road regulations. Each needed to pass the Vehicle and Operator Services Agency’s (VOSA) Single Vehicle Approval test – an inspection carried out on any imported vehicle to ensure it is safe.

Although already running on CNG, it was a rudimentary system and needed ugrading to the standards required here.

Ponniah used a firm called Green Conversions but, despite its expertise in CNG systems, there was still a lot of work to do on other parts of the system.

He says: ‘The budget we had allowed for the work quadrupled. We made changes to the braking and fuel systems as they weren’t advanced enough for UK roads. There was a lot more stuff that needed doing than we envisaged.

‘It cost £2,500 for each vehicle, just on safety features such as side impact protection, roll-over bars and seatbelts.

‘The wiring was also changed and the battery moved from the side to the middle of the vehicle in case of an impact.’

Ponniah also had to make sure the tuk-tuks could get back on the road should something go wrong. That meant ensuring a ready supply of spares was on hand.

Some parts were available in the UK, but others had to be brought in from India.

Ponniah then needed someone to drive them. Unlike normal cars, tuk-tuks have handlebars with the clutch lever and gearchange included, rather like a Lambretta scooter.

Top speed is 35mph and the tuk-tuks can turn in one lane of traffic.

He advertised for drivers before the vehicles arrived and put the lucky few through an intensive training course to ensure they could handle the unusual vehicle characteristics.

Insurance was organised through a specialist broker.

Ponniah teamed up with CNG supplier Chive Fuels to have a small filling station set up at Brighton Marina.

‘It was a major undertaking to put that together – the investment is about £80,000 – but we want to make it available for everyone and not hog it ourselves.

‘This will also help fuel companies recover their investment. We really want to encourage people to go green, and they won’t use CNG if it’s not there.’ 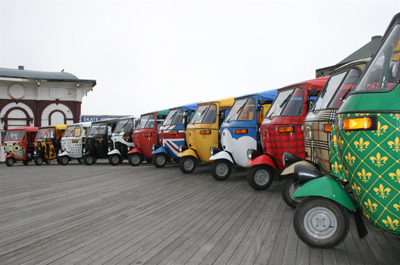 The firm finally opened for business on July 10.

When winter arrives, Ponniah plans to use blankets and hot water bottles for drivers and passengers.

He is planning to expand Tuctuc Ltd to other cities in the UK, including London by next May and Birmingham, Bristol, Edinburgh and Manchester by 2008, and he hopes to open CNG stations for the public in those locations as well.

The knowledge and experience he and his 25 staff have gained in fleet assembly and management will, he hopes, serve them well.

Ponniah says: ‘It’s a steep learning curve – these vehicles have never run as public transport outside of Asia, but we’re going to take what we’ve learned to make sure it runs to perfection in other cities.

‘Tuk-tuks are the future – they’re very cheap and economical and very convenient as well. They have the convenience of a taxi for the cost of a bus ride.’