Was this article useful?
Click the thumbs up >
PETROL/electric hybrid cars have been around for several years now – and seem to be the latest fashion accessory for film stars and politicians – but so far there are no commercial vehicles offering this fuel-saving technology.

Politicians may be making big noises about their desire for UK plc to green up its act, but as things stand, commercial vehicle manufacturers are not even required to provide fuel economy or CO2 emissions figures for their vehicles.

But this curious state of affairs is about to change. Enter the Mitsubishi Fuso Canter Eco Hybrid, the world’s first diesel/electric hybrid, which went on sale in Japan on July 5.

The Canter only sells in small numbers in the UK but what is exciting about the technology is that it can – and will – be used in other vans such as the Mercedes-Benz Sprinter and Vito. 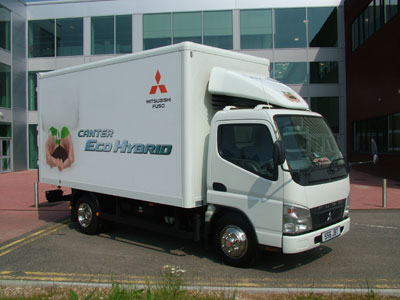 Mitsubishi Fuso is the truck division of Mitsubishi and is 90% owned by DaimlerChrysler, which has footed the bill for the development of the hybrid technology.

The new Canter features a four cylinder 3.0-litre Euro IV diesel engine pumping out 125bhp and 213lb-ft of torque while the electric motor mated to it adds an extra 147lb-ft of torque. Electric power is provided by a lithium battery developed by Hitachi Vehicle Energy.

The gearbox is a five-speed automatic while the Canter also boasts Mercedes-Benz’s stop-start system which cuts the engine out after three seconds idling and is aimed at further improving fuel economy. 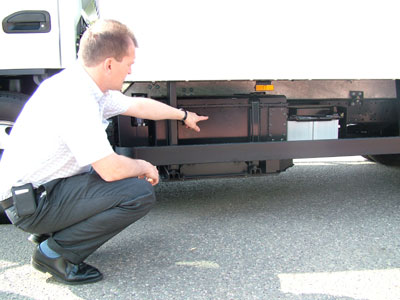 Tests in Japan so far have claimed fuel savings of up to 30%. DaimlerChrysler CV specialist Simon Wood said: ‘A lot of other manufacturers may be talking about hybrid power but we have a vehicle here and now which is on sale. We showed it off at the CV Show in April and it produced a huge amount of interest. Already one major supermarket chain has been assessing this vehicle and a lot of smaller fleets have also been asking about it.’

Wood refused to be drawn on a timescale for hybrid Sprinters and Vitos but said: ‘In the future we could see this hybrid power on all our commercial vehicles. The technology weighs 200kg at present, which would mean an equivalent reduction in payload. This could be a problem for a smaller van like the Vito but we are confident that we can get this weight down to 150kg.’

The hybrid Canter costs £5,900 more than its ordinary brother, which starts at just £14,600 excluding VAT, but Wood pointed out that with 30% fuel savings possible, this money could eventually be recouped.

There is also a possibility that when it arrives in the UK, it will escape the London congestion charge, although as it is a world first, this has not yet been confirmed.

The question of low residual values also hangs over hybrid vehicles, which has to be taken into consideration.

But despite these drawbacks, Wood reckons that hybrid technology will be forced upon many fleets whether they like it or not.

He said: ‘Everyone is beginning to realise that we can’t just keep using up the earth’s resources like we are doing. Fuel-cell vehicles are a good 20-25 years away and hybrids are the best bet for today. We all have a duty to try to minimise fuel consumption and we are proud that we are the first to bring a vehicle like this to market.’

However, one problem that needs addressing with hybrid vehicles is driver attitude. If a hybrid is driven aggressively, savings will be negligible.

Wood advised: ‘Drivers need to be in on any fuel-saving initiative and need to be willing to help out. For example, a fleet could set up a scheme whereby drivers would be paid a percentage of any fuel savings made.’

Wood was also disappointed that the Government has decided not to re-introduce incentives for companies to buy green vehicles.

He said: ‘The Japanese government gives incentives for green vehicles and I believe our Government should do the same.’

NOT only is the Canter Eco Hybrid unique in being the only diesel/electric commercial vehicle in the world but the model pictured here is the only one in the UK.

It was heading off to the USA directly after I had driven it, but during its four-week stay in the UK, it caused quite a stir.

I was the first British journalist to test the truck and the immediate plus point I noticed when climbing aboard was that being built in Japan, the Canter has a steering wheel on the right side of the vehicle.

That’s one manufacturing problem immediately sorted out then.

At six tonnes gross vehicle weight, I was expecting a bit of a heavy, sluggish driving experience but I was soon proved wrong. The Canter is smooth, quiet, nimble on its feet and very easy to manoeuvre.

One great thing about the hybrid technology is that drivers won’t need a lesson in how to use it.

It gruffles away quietly to itself under the cab, sometimes whisper quiet and at others more noisy as the diesel motor cuts in over the silent electric one.

The gearbox can either be used in full auto mode or in semi-auto mode, where gears are changed by nudging the lever up and down.

The stop-start system is a doddle too. When the truck stops, the engine dies after three seconds.

A dab on the brake and it quietly thrums back into life. It’s pretty useless during motorway blasts but is a real boon as a fuel-saving device in urban environments.

So the Canter is as simple as that. It will feel a bit weird at the start but after a few days, drivers will enjoy its endearing little ways. And as long as Wood’s profit-sharing idea is in place, they will certainly be driving very carefully.