Was this article useful?
Click the thumbs up >
THE new Nissan Cabstar made its first official appearance at the show prior to its launch in the UK in 2007.

The new vehicle is a radical departure from its predecessor and has been designed specifically for European tastes. It will be built at Avila in Spain.

Revealing the new Cabstar, Andy Palmer, Nissan’s global head of light commercial vehicles, said: ‘This is not another Japanese truck – it has been developed for European customers and has been made as safe as a car.’

Palmer also announced a new tie-up with Volvo truck dealers, which aims to enhance Nissan van dealer network. Nissan will be taking its pick of what it con siders to be the bext outfits and adding a Nissan van franchise to them. 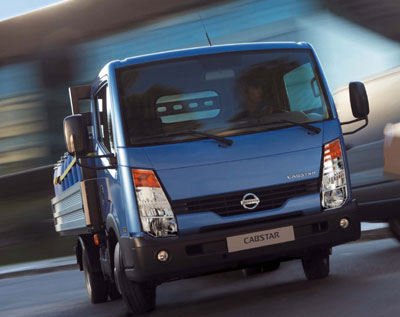 He also revealed that Renault Truck will be taking 10,000 Cabstars a year to be rebadged with the French manufacturer’s name.

Also on the stand were upgraded versions of the Primastar and Interstar, fearturing Euro IV compliant engines.