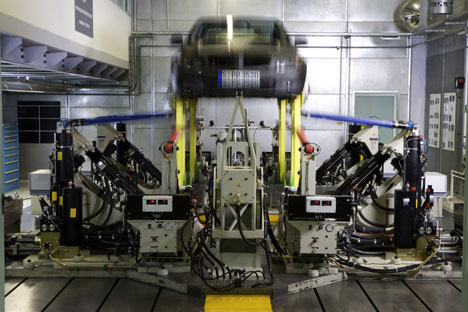 THE development of the C-class has been the most extensive in Mercedes-Benz’s history, with almost 1,000 prototypes driving a total distance equivalent to 62 trips between the Earth and the moon.

A brand new Mercedes-Benz C-class, as yet unseen by the public, is strapped to a fearsome looking machine.

Four robot arms, powered by massive hydraulic rams, grasp the car by the wheel hubs and shake it violently. Expensive crashes and bangs fill the vast warehouse in which the leviathan sits.

This is not some science-fiction account of the fall of Mercedes-Benz at the hands of killer automatons. Rather, it is the most spectacular part of the gruelling testing regimes that the C-class, and all future Mercedes-Benz models, will go through.

A few miles outside Stuttgart at the vast Sindelfingen plant, the final stages of tests to the new C-class are being carried out. The car will be immensely important to Mercedes-Benz and, with 60% of UK vehicles expected to go to fleet customers, the industry will be expecting it to be something worthy of the three-pointed star.

Speak to fleets, and they will tell you that in the past few years what you got from Mercedes-Benz was not always what you expected. Reliability has been an issue, with even the firm’s executives admitting it hasn’t maintained its industry-leading standards. Hence the most rigorous testing programmes for any of its new cars.

As a result, some 900 prototype and pre-production cars have been subjected, over the past three-and-a-half years, to 15 million miles of testing – the equivalent of driving around the equator 600 times.

VIRTUAL
BEFORE any machines got to work on cranking out a prototype, Mercedes engineers already had a pretty good idea of what kind of strain each component of the new C-class could take.

Computer simulations are now advanced to the point where the behaviour of each part of a new car, and the way they interact with each other, can be predicted with accuracy.

Such predictions mean that when the hardware is finally created, it can be at a much more advanced stage than was previously possible.

BIT BY BIT
EVERY single component in the new car has been tested to destruction on its own. Across Sindelfingen, an array of complex-looking machines whirr and thump away 24 hours a day, each tormenting a particular part.

In addition, assemblies are constructed and subjected to similar treatment to make sure combinations of components won’t collapse during the life of the car.

Walk around Sindelfingen, and you’ll see giant rams batter a full front suspension assembly, while round the corner a balljoint seal is being assaulted by an industrial jet washer.

In the next room, brake discs are subjected to a recreation of the stresses of 60 hours of high-speed laps at Hockenheim. Elsewhere, engines, transmissions, axles, cooling systems and other parts are systematically worked to the full, non-stop.

The piece de resistance is the full C-class, minus wheels, being shaken about as described in the introduction above.

Such rigs can reproduce Hockenheim, the Nürburgring or Mercedes-Benz’s own test track, the fearsome ‘Heide’.

Like the real road, its virtual counterpart is 150 times more intensive than normal driving, making 1,200-mile test runs equivalent to a 200,000-mile life in the real world.

Every 60 miles or so, engineers stop the test and inspect the car and in the meantime 150 sensors keep watch for weaknesses.

HIT THE ROAD
ONCE every piece of the new C-class had been rigorously put through its paces, a complete car could be built, ready for testing on the road.

Historically, Mercedes-Benz has tested the early versions of production cars on a notorious stretch of road at Lüneburg Heide. Going back 50 years, this length of track was in such bad repair that it would issue immense punishment to cars daring to venture over it. Therefore, any car that got through unscathed could cope with anything.

Unfortunately, the efficient Germans have now mended the road that Mercedes-Benz relied on to benchmark its cars. The company’s solution was to install a replica ‘Heide’ at the Sindelfingen test track. The new C-class, like all future Mercs ahead of it, underwent weeks of relentless battering over cobbles, potholes and every other feature that makes up a suspension strut’s worst nightmare.

While various models are being shaken to bits in Germany, other prototypes are journeying further afield.

Each test driver completes 93,000 miles on a mixture of country roads, motorways and inner city roads over a one year period, both during the day and at night. On top of this, pre-production vehicles completed 31,000 miles full-throttle endurance tests at an Italian proving ground and further proving ground work at Papenburg, Germany.

More than 15,000 miles was covered during trailer endurance tests, which saw several C-classes pull a 1.9-tonne trailer around the roads of the Swabian mountains in southern Germany.

To stop there would, of course, be doing half a job – what about the further ‘accelerated rate’ endurance tests, which covered 50,000 miles over six months, including 3,700 miles at the Nürburgring and 9,300-mile electrical endurance tests to test the electronic systems. No one wants their Merc to go rusty, so there was also a corrosion test which simulates 9,300 miles of driving under the most gruelling dynamic and climatic conditions.

AROUND THE WORLD
THE tests take place across the globe and in all conditions. Engines are tested in South Africa, air conditioning in the sweltering heat of Arizona, USA, and heating systems in the bitter cold of Scandinavia. Car bodies and interiors are given a thorough going over in Texas, chassis in Germany and electronics in Japan.

The culmination of all this globetrotting was, for the C-class, a final examination ahead of the production launch. Two fully-equipped production models were sent on a 32,000-mile journey to simulate the life of a car.

They started in Germany with 3,000 miles of gravel tracks and then headed to the freezing roads of Finland. With temperatures plunging to -40 degrees C, the heating systems were given an intense work out.

After a quick stop-off in France to drive around the congested city centre, the cars headed to the Middle East, where temperatures rarely drop below 40ºC. Here, the C-classes covered 3,000 miles of city testing at speeds never much higher than 6mph.

This gave the pedals an extreme workout, while the rest of the car was challenged to 7,500 miles on Tarmac roads and sandy tracks in the Arabian desert.

Finally, another desert – the Namib in Africa. Covering 14,000 miles, taking in climbs of up to 23% and hundreds of bends and hairpin turns to reach altitudes of almost 2,200 metres. This final challenge took its toll, consuming dozens of tyres and wheels, several windscreens and an exhaust silencer. But the main body of the car passed the test with flying colours.

Right up until the launch, Mercedes-Benz employees in Germany will test 450 pre-production models to report back any glitches or concerns.

THE ACID TEST
AS a result of such extreme lengths, Mercedes-Benz is confident that the new C-class will be its most reliable car yet, something that it hopes will confound critics of its quality in recent years.

The finished product will be unveiled for the first time in Stuttgart this month, and European customers should be able to buy it from around April.

Only after they start eating up the miles will Mercedes-Benz know for sure whether all its hard work has paid off.