Was this article useful?
Click the thumbs up >
I hate motorways.

Actually, to be more specific, I hate the M40 and the A34 north of Oxford, its partner in crime.

It’s a journey I make quite often and, without fail, I can guarantee it will add half an hour to my trip with slow-moving jams or stationary traffic.

It’s not unusual on Britain’s over-crowded motorway network – according to recent research drivers spend at least six million working hours a week like this – but there is just something so inevitable about the M40.

Which is why our long-term Citroën Dispatch now has a special place in my heart for saving me from the worst of this glorified car park for the first time in years.

Our van is fitted with standard satellite navigation, courtesy of the boffins at Trafficmaster and it includes the excellent live congestion warning system.

It looks pretty basic, but that is all drivers need and as I approached the M40, the nice lady behind the dashboard chimed in with a warning that there was significant delay ahead and asked if I wanted to reroute.

I took a gamble and said ‘yes’ and put my faith in the hands of technology.

And it was lucky I did, because as I sailed over the M40 on to the B430 instead, I looked below me at a solid mass of stationary vehicles.

By the time I rejoined the A34 and continued my journey, it had saved me the best part of 25 minutes and whole heap of stress.

Mind you, the cab of the Citroën does make an excellent office to spend your day in, with plenty of space for storage, a good stereo and very comfortable seats.

It has now covered thousands of miles and carried a whole assortment of business luggage and equipment, ranging from exhibition stands to sofas.

It has even undertaken whole house moves.

The reception from a range of drivers has been universally positive, especially the car-like driving experience which is ideal for those with limited experience of LCVs.

One of the areas that receives the biggest praise is the twin sliding doors, as they make it much easier to secure loads from the side, rather than trying to work while jammed against the inside of the van.

However, like all vans, the Citroën has a pathetic interior light in the rear which won’t really be up to the job when early winter nights set in.

And with fuel economy of 40mpg despite a large number of town journeys, it is proving itself to be a thrifty addition to the fleet as well, beating Citroën’s own figures.

Talking of which, the firm is to be congratulated for its initiative in producing fuel economy figures, which offer an excellent guide to help fleet managers predict their fuel costs. 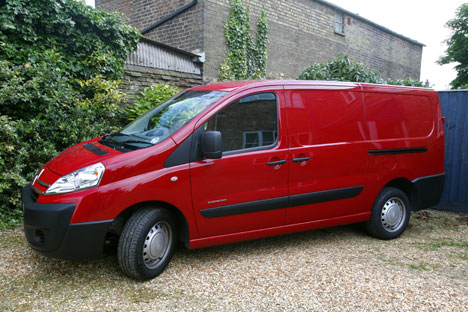 From our experience, they are very accurate and allow employers to identify vans with lower-than-average fuel economy.

With our van performing better than average and also paying for itself by avoiding time wasted in traffic jams, it is already saving money.

Overall, it’s a strong performer and one that deserves serious consideration on any fleet manager’s choice list.