Was this article useful?
Click the thumbs up >
Some light panel vans I could mention suffer terribly in the looks department in high roof format.

Dashing and handsome in their standard guises, they suddenly assume hideous proportions when they have a large ugly metal lump welded on top of them.

Not so the new Citroën Dispatch. It looks superb as a low-roofer and in my opinion even better as a long wheelbase high roof variant, as tested here.

The old Dispatch only had one model on offer, but the new one, which went on sale in April, boasts short and long wheelbases and standard and high roofs, although you can’t have a high roof with an SWB – that really would look silly.

Our test vehicle came loaded down to the rafters with add-on goodies which are much appreciated but, of course, add to the basic list price of £16,220 (ex-VAT).

A NaviTrack pack with colour sat-nav and phone costs £1,090 and air-conditioning adds £780.

Our van also had that best of all add-ons – a reversing sensor (£190) – which, in my opinion, should be a standard fitment on all commercial vehicles.

Even without all these bells and whistles the Dispatch isn’t badly specced in standard form.

You get a driver’s airbag, ABS brakes, CD player and a Trafficmaster sat-nav unit which also warns of little annoyances ahead such as GATSO cameras.

It also doubles up as a stolen vehicle tracking system.

One of the big problems with the old Dispatch was that it didn’t hold a great deal of cargo (four cubic metres to be precise).

This model bumps the cubes up to seven, while payload is a useful 1,188kg.

The Dispatch proves a sheer delight to drive on the roads, with plenty of power at 120bhp (you can have 136bhp if you want but it really isn’t necessary) while our model featured optional traction control which is well worth it for peace of mind at £300.

The driver’s seat is firm and comfortable although there isn’t a lot of room for the middle passenger, it must be said.

Meanwhile, as Citroën now publishes its fuel economy figures, we can reveal that this van should return 39.2 miles per gallon.

Our test figure came out at 35.6, which isn’t far off, although we drove the vehicle empty. 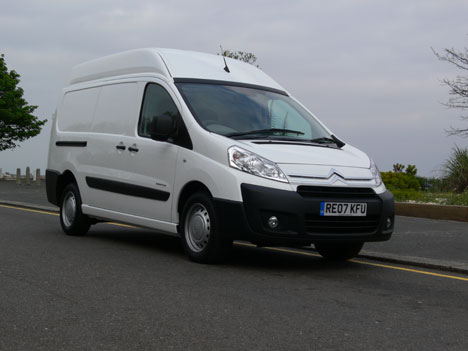 The new Dispatch is a superb van which knocks the old one in to a cocked hat. Drivers who liked the old model will just love this one.