Was this article useful?
Click the thumbs up >
The numberplate of our test vehicle (almost) says it all. H13UGE is about as big as vans get up to 3.5 tonnes gross vehicle weight.

You won’t find the local florist driving one of these – the LWB high-roof Nissan Interstar is built for heavy weights and fast speeds and is most likely to be found thrashing up and down the M6 loaded to the gills with cargo.

The Interstar also comes badged as the Vauxhall Movano and Renault Master, such are the vagaries of the automotive world, but it could be important having a Nissan badge on the front if, say, you wanted to buy some Cabstars for your fleet too.

It would be much easier to negotiate a juicy deal that way.

The Interstar features several improvements for this year.

There is now a single 2.5-litre diesel engine and it’s Euro IV compliant.

There is a new six-speed manual transmission too, along with ABS brakes and ESP traction control, although unlike in the rival Ford Transit, Mercedes-Benz Sprinter and Volkswagen Crafter, ESP doesn’t come as a standard fitment.

With 14 cubic metres of loadspace in the back it isn’t the biggest volume van on the roads, but with a payload of one and a half tonnes, it’s unlikely that you’ll need more space than is offered here.

Not only is this engine a stonking performer but that maximum torque comes right down at 1,500rpm, which makes it feel even faster than it is.

The driver’s seat has to be one of the best in class with lots of support right from the neck to the back of the knees.

I like the steering wheel position too, which is still almost horizontal and big like a proper truck one.

There are also masses of storage spaces, including two overhead cubby holes.

This van has been somewhat left in the shadows by the dashing new Sprinter and Crafter but – standard ESP apart – it can hold its own against most of the rivals. 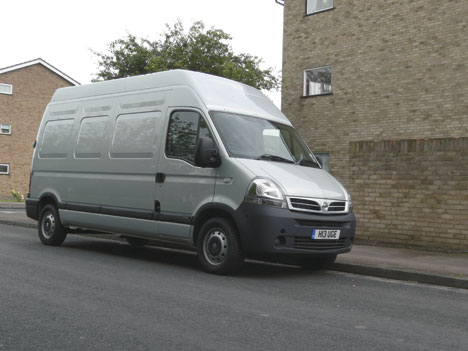