Was this article useful?
Click the thumbs up >
IT doesn’t seem six weeks ago that the Citroën Berlingo arrived at the Fleet Van offices – but in fact is was six months ago and soon the man from Citroën will be knocking at our door asking for it back.

In that time, I have built up an enormous respect for this van – it’s a model that rarely gets feted publicly but plugs along faithfully doing a cracking job week in week out. Sounds a bit like me, in fact!

Our test vehicle is a rather rare example of the genre, loaded down to the gills with extras like twin side sliding doors, metallic paint and air conditioning.

In fact, there probably isn’t another one like it in the UK. I’d certainly consider the paint and air-con if I was buying a Berlingo as the cost would almost certainly be recouped at selling time, but the side doors haven’t really been used a great deal.

In its time with us, the van has behaved impeccably apart from suffering a cracked windscreen, which wasn’t its fault.

It has proved comfortable and practical in everyday use and has managed to return an admirable 49 miles per gallon during its time here, which is pretty good going in anyone’s book.

This engine variant – a 2.0-litre unit pumping out 90bhp – isn’t available any more, having recently been replaced by a 1.6-litre Euro IV compliant common-rail diesel offering the same output.

The fact of the matter is that diesel technology has come on at such a pace that you don’t need all those cubes any more to maintain a reasonable speed. The smaller unit does the job just as well and doesn’t pump out so many noxious gases either.

This van isn’t a bad little mover on the roads either. Even weighed down to the gills with cargo it proves a nimble performer.

Meanwhile costs have been limited to the price of a service at 12,000 miles. 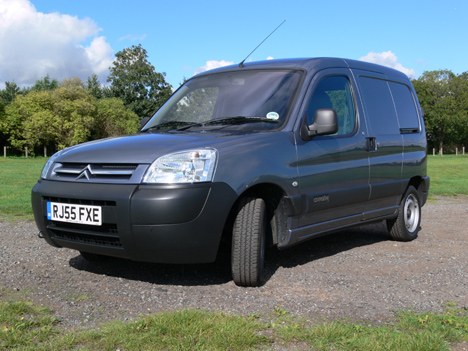