Was this article useful?
Click the thumbs up >
AT the official launch of the new Transit in Frankfurt last year, the then Ford LCV chief Gary Whittam boasted: ‘The best van by a mile just got better by a mile.’

We were impressed then with the left-hand drive vans and having just got my clammies on the first right-hand drive version, I reckon Whittam might just be right.

The Transit has been the UK’s panel van leader by a mile since its launch in 1965 and despite the opposition playing catch-up since then, Ford has always managed to pull itself back to the front.

Take ESP traction control for example. At the launch, we were told this safety item would be a paid-for option at £250. But when the new Mercedes-Benz Sprinter and Volkswagen Crafter were launched soon after, they both had ESP as standard.

So Ford took a raincheck on the situation and decided to make it standard too from January 2007.

It seems that every time the opposition gets one up on Ford, the blue oval leapfrogs ahead again.

So just how good is the Transit? We spent a week behind the wheel of the smallest, the short wheelbase 2.8-tonne gross vehicle weight 85bhp version priced at £14,349 ex-VAT), to find out.

Those drivers who have become familiar with the Transit over the years will hardly recognise this van over its predecessor. What a transformation.

There’s a smart new dash with lift-up lids on the top at both sides and in the middle, a flap folds over the reveal a handy tray and cup holders.

The dash has been transformed from its old slab-like shape to something that would not look out of place in an upmarket car.

On the downside, the old Transit driver’s seat has been carried over and I find it a tad uncomfortable. However, shorter drivers don’t complain so maybe I’m just too tall at 6ft 4in.

In the rear, things are much as they were before. There is a full bulkhead and single side loading door, together with unglazed rear doors. This model has a 1,195kg payload and will swallow 7.9 cubic metres of cargo.

There are six load-lashing eyes, although no sign of any internal protection. Take our advice and fit ply lining immediately. 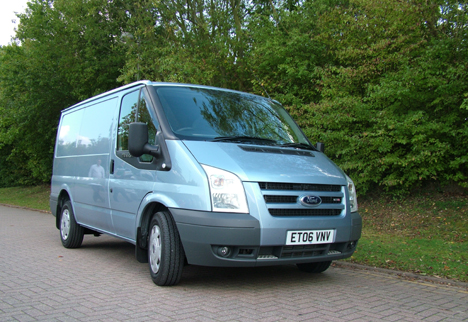 It’s not only the cab of the Transit that has been transformed – this van is at least a mile better than the old one in the drivability stakes. Gone are the rattly old TDdi engines – only common rail TDCi units are on offer now. And gone too is that four-foot long floor-mounted gearstick.

Our van had the 2.2-litre unit pumping out 85bhp and 250lb-ft of torque and it’s a honey. It’s a willing and lively unit and such was its sprightly performance that we had to double-check with the Ford press office to make sure they hadn’t accidentally put the wrong badge on it. It feels like at least 115bhp if not more.The secret is that maximum torque comes at a low 1,500rpm, giving the van a huge amount of oomph at low speeds.

Even on cold mornings, there is no diesel death rattle – just a quiet thrum. The gearchgange is slick and smooth and the steering wheel is as small as the ones you’ll find in Ford cars.

It’s all part of Ford’s plan to give the Transit a car-like feel – and it has certainly succeeded. Once on the road, for all the world you could be driving a big car. Meanwhile massive side mirrors give a great view of what’s behind.

And I felt completely safe in this vehicle. Driver’s airbag, ABS brakes and ESP traction control all come as standard – so the Ford Transit has finally brought a mainstream commercial vehicle up to the safety standard of cars.

THIS new Transit is vying for sales with a new Mercedes-Benz Sprinter and a new Volkswagen Crafter.

All are superb vehicles and I’d be hard-pressed to choose a favourite. At the end of the day it might just come down to who offers the biggest discount. 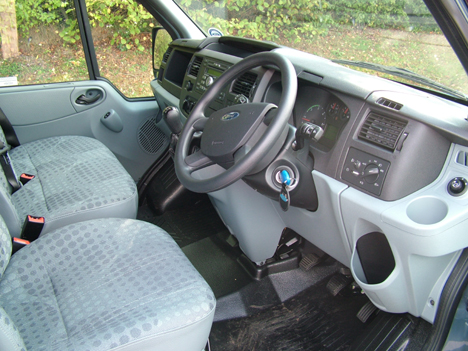