Fleet technology: ‘Measure to manage’ is the way to reduce pollution

Was this article useful?
Click the thumbs up >
At a glance

If you want to get ahead in today’s fleet world, it’s not enough to have a Toyota Prius on the fleet and encourage eco-driving. The environmental boulder is gathering pace, and the fleets that outrun it will need to make more than a token effort.

There is much talk around the industry of reducing carbon footprints and becoming carbon neutral. But before fleets can offset what they emit, they need to measure what they emit.

And don’t forget that although most of the talk surrounds carbon dioxide, that’s not the only pollutant that vehicles spew out. What about particulate matter, nitrous oxide and carbon monoxide?

The best that firms can currently do is guess. Manufacturers publish emissions figures, and by keeping track of mileage fleets can hazard a rough guess of what is being pumped into the atmosphere. But who knows by how much estimates and actual emissions differ? 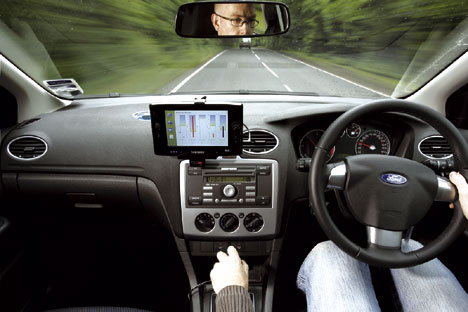 This problem is being addressed by a new gadget expected to be available as part of telematics solutions by the end of the year. Eco-Log is being developed by a vehicle engineering firm called Lysanda and promises accurate vehicle emissions data that can be instantly gathered and included in reports.

Eco-Log works by plugging in to a vehicle’s on-board diagnostics port and reading information from the vehicle’s own sensors.

Its makers hope to launch the technology to telematics service providers in the near future for inclusion in their solution packages. Cost will depend on the service provider and the product.

A prototype version of Eco-Log was shown by Simon Harris, Lysanda’s commercial director.

Housed in a Ford Focus 1.6 TDCi, the information is displayed on a Samsung tablet PC. Don’t expect that for the final version, however – the production release will display either on a sat-nav style screen or won’t have a screen in-car at all.

“It’s not for the driver but for the fleet operator,” explains Mr Harris. “It will tell them about their carbon footprint, their pollutants and the fuel economy. In this case it’s revealed to you and me but in the final application it would be revealed to our boss.”

Each column shows the actual output as the engine runs, while the manufacturer’s claimed output is benchmarked on the scale. The actual readouts can be updated either every second or each kilometre.

As well as emissions, the system also measures fuel consumption.

“This will be the most accurate way of reporting fuel usage,” Mr Harris promises.

Because it uses the on-board diagnostics port, Eco-Log can also keep a close eye on how the vehicle is operating. It can read such information as manifold pressure, exhaust gas temperature and more.

“We think we can predict the likelihood of serious engine failure and warn the owner,” Mr Harris says.

“Each vehicle could have a threshold and if any statistics exceed it the vehicle owner could be notified automatically. There’s certainly potential there for that.

“At the moment, people want to know how much fuel, how much CO2 and maybe how much NOx. There are ways of measuring fuel on the fly but they won’t tell you the reason for a particular vehicle getting through a lot of juice. We will be able to tell whether it’s a driver, the journey, the vehicle or all three. We will even be able to tell if the vehicle is overloaded.”

All impressive claims, but if all the information is being taken from the vehicle’s own sensors, how does Eco-Log know if the data it is receiving is accurate?

“It’s all done by guesswork,” says Mr Harris, somewhat surprisingly. “There are no sensors in the exhaust pipe or in the manifold – it’s done by a very complex analysis of the electronic information at the front end. All the functions are interpreted by our software which then says ‘right, if that’s what’s going on at the front end then coming out the back should be the following’.”

Could this be where the Eco-Log’s bold claims fall down? Of course Mr Harris will say the software gets things right, but it is, as he admits, guesswork.

However, he does have some strong claims for the accuracy.

“We took this vehicle to Millbrook, put it on a dyno and ran it eight times on the facility’s test cell. 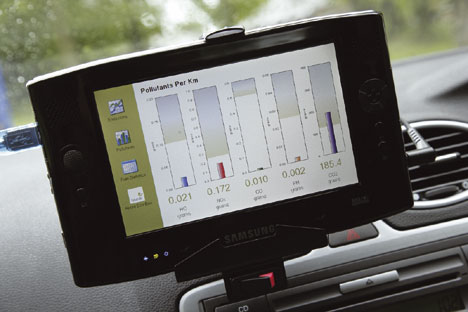 “We compared the results from what our equipment guessed and the gas that was extracted and analysed from the cell. We were within 1%.”

WHEN WILL IT BE AVAILABLE?

Several versions of the device are planned for general production. The first one, likely to be called CO2 Carbon, will measure only carbon emissions and fuel consumption and be released by the end of the year.

The second suite, CO2 FE, will include all the features and a third called CO2 Payload will let operators know how much of the vehicle’s capacity is being used.

There is still work to be done before Eco-Log is ready to be rolled out, but early indications are that it could be a useful tool for fleets.