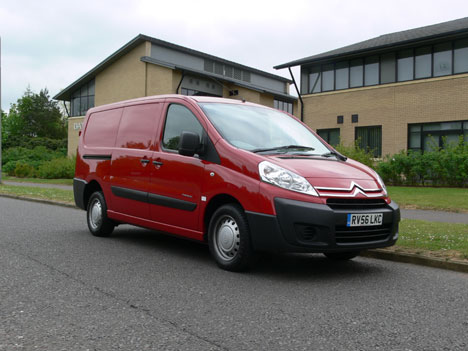 For those of you who are paying attention, you may be experiencing a sense of deja vu.

On the opposite page we introduced a long-term Peugeot Expert and on this page, we have another long-termer that is the spitting image of the Peugeot.

The Citroën Dispatch 120 will be with us until July and comes in passion red, which makes a real difference to its looks and helps it stand out even more than the Peugeot which is already making friends at Fleet Van.

A key difference is the treatment of the front end, with the Citroën logo making the most of the van’s stylish looks. In fact it could be the catwalk queen of the commercial vehicle world.

Our test model is the long wheelbase variety, with a low roof height and 2.0-litre 120bhp common rail diesel powerplant and weighs in at £15,720 ex-VAT. Other models have either 90bhp or 136bhp on offer. As it is based on the Citroën Synergie MPV platform, it can truly boast a car-like driving experience, although obviously it’s been beefed up for load-carrying purposes.

On the road, the 120bhp engine gives power aplenty so I can’t see why any fleet would want the higher-powered 136bhp version.

Our test model comes with a handy overhead long load facility, which would pay dividends for fleet operators.

But what really sets it apart is the standard Trafficmaster sat-nav, which has already saved 40 minutes by automatically re-routing me past delays in the first two weeks. It also includes standard Trackstar stolen vehicle tracking, which we hopefully won’t need during its time with us.

And as Citroën publishes official combined fuel consumption figures for this van (39.2mpg), we will be able to put this claim to the test in the real world.