With a bullish message coming from the new market and plenty of confidence being displayed by dealers, you would expect the used market to remain strong – and you won’t be disappointed.

The LCV market continues to outperform the car market and most other areas of the economy.

However, there are some signs that prices are beginning to soften as the summer months approach and it will be interesting to see if this trend continues.

However, despite average monthly values being at record levels from March to May, the underlying trend suggests a slight softening in values is under way.

Fleet and lease vans at BCA averaged a substantial £3,915 in Quarter 1, the highest quarterly figure on record.

Values in both April and May outstripped even that record figure at £4,057 and £3,984 respectively.

However, looking at the monthly figures in a little more detail shows values declining from a peak in March (at £4,148). Performance against guide was also lower in May than any other month this year.

While age has remained relatively static at around four years, mileage has crept up over the months and is now over 5,500 miles higher than in January (see table below).

Meanwhile, part-exchange values have noticeably stepped up in 2007. Average values in the first quarter of the year rose to record levels, at £3,244.

Both age and mileage averages fell noticeably (by three months and 6,000 miles respectively) while CAP performance improved marginally to sit at 99.3%.

Part-exchange values on average are around £500 ahead in May of where they were in January.

However, some of the May value increase must be attributed to the reduction in average age – down by four months on April – and a similarly noticeable fall in average mileage by over 7,500 on the previous month.

Competition leads to a huge average price differential over the fleet/lease or P/X sourced vehicle – with nearly-new values averaging up to three times the typical corporate entered four-year-old van.

Nearly-new values climbed in February, but were hit hard by the new plate in March, dropping back by nearly £1,000. Values rallied strongly in April and May and now sit around £10,725.

Looking at the three sectors together shows that fleet and lease van values have been remarkably steady in recent months, while values for the slightly older P/X vans have been climbing for some time. Nearly-new values peaked late last year and have settled at a lower level in 2007 (see table below). 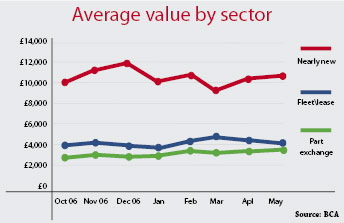