Is it an SUV? Is it a soft roader?

No it’s a van – honestly! It may look like a chic urban passenger car but lift up the tailgate and underneath you’ll find a pukka load floor complete with load-lashing eyes.

My my, how the world of commercial vehicles has changed in the past 10 years.

The Mitsubishi Outlander is one of the stylish new breed of soft-roaders that are emerging at present and with a bit of jiggery-pokery in the engineering department, the Japanese maker has turned a stylish car into an equally stylish van – and it’s one that isn’t afraid of getting its feet muddy either.

The Outlander, as a car, is big – the only one in its sector to offer seven seats as standard in fact.

So in the rear there is no shortage of space. This van will swallow two cubic metres of cargo and boasts a payload of 700kg.

It also has a towing capacity of 2.0-tonnes.

Under the bonnet is a Volkswagen 2.0-litre intercooled turbodiesel powerplant offering 138bhp at 4,000rpm and 229lb-ft of torque at 1,750rpm, mated to a six-speed manual gearbox.

This translates to a 0-60mph time of 10.8 seconds and a top speed of 116mph, allowing drivers to leave most other vans in the Outlander’s wake. Switching from two to four wheel drive is courtesy of a knob on the centre console.

Meanwhile CO2 is a reasonable 183g/km and fuel economy on the combined cycle is a surprising 42.8mpg, meaning that fleets can buy this vehicle without being looked upon askance for choosing one of those big noisy, polluting 4WD vehicles.

Included in the price of £17,025 ex-VAT are driver and passenger airbags, ABS with EBD, keyless entry, an alarm, electric heated mirrors and windows, an immobiliser and a radio/CD player with MP3 compatibility.

Not bad for a commercial vehicle.

I drove the Outlander car on its launch in Spain recently and was immediately taken by its dashing good looks.

Those old boxy soft-roaders are now a thing of the past as sleek, svelte models like this take over.

It looks rather like an L200 from the front – which is no bad thing – and the sweeping side lines give this van a chunky yet stylish look.

The rear windows are blacked out so from the outside you won’t know this is a commercial vehicle, as I discovered when I traversed the Queen Elizabeth bridge at Dartford the other day and managed to sneak through by coughing up just a quid instead of the customary £1.80 for a commercial vehicle. Result!

The only disappointments here are the steel wheels with rather unconvincing plastic covers that are supposed to make them look like alloys – but don’t.

At this point, I must make mention of a report on the Outlander car in the Sunday Times, which happened to coincide with my test week.

The tester, one Richard Bremner, spoke of the car in more than derogatory terms, complaining that the seats were uncomfortable and that the engine was unrefined.

All I can say is that Mr Bremner must either have had a very bad example of this vehicle or that he resides on a rather different planet from us mere mortals.

The seats in my van were superbly firm and comfortable, with lots of support in the side and lumbar regions, while the engine (more of which later) I would describe as smooth and silky.

The load area is good and square and features a carpet on the floor and lots of countersunk lashing eyes to hold things in place.

Meanwhile at the sides, the rear doors are fully functional so small items can be slipped in here.

At the back, the tailgate flips up and a small bottom portion pulls down, allowing longer loads to be slid in and out easily. That’s a little extra you don’t see often.

Ignoring the opinions of my friend Mr Bremner, my assessment of this engine is a positive one.

It pulls lustily in all gears even if you do have to be firm with the throttle pedal at times and at motorway speeds my partner and I conversed in quiet voices.

The Outlander tackles fast bends with aplomb too, although I did find the power steering a little on the light side. You don’t get a lot of feel for what’s happening ’twixt steering wheel and road.

I didn’t manage to take this van off-road but I had plenty of chance to sample its gruffer side on the car launch.

Switching to four wheel drive sends 30% of the power to the rear wheels and will see the vehicle through most everyday rough bits. Switching again to diff lock and the power is split 50:50. 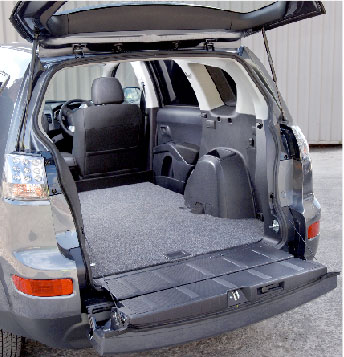 While the Outlander is not meant to be a true off-roader, I cannot see many places where it would founder and get stuck.

While the Outlander isn’t going to be a big seller in the fleet market, I can see plenty of places where this van will come in useful. It will also delight any driver who gets it to use on a day-to-day basis.