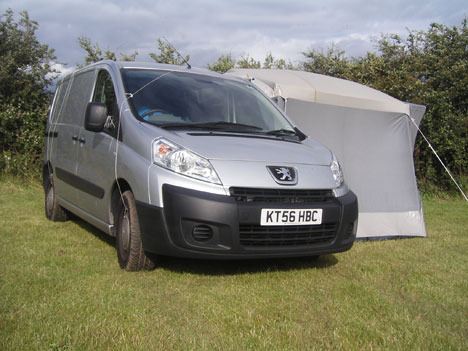 Summer’s here again, which means it’s time for the Mem Sahib and myself to decamp to various green fields across the length and breadth of Olde Englande on our annual round of music festival visits.

Readers of some years’ standing will no doubt already be aware of the routine – blag a van, tether it next to an awning which used to belong to my beloved old VeeDub camper et voila, we have a ready-made home for the weekend.

This year, our long-term Peugeot Expert was hauled into use and before anyone starts laughing about the thought of a journalist actually living in a test vehicle, I can tell you that spending a weekend camping in a van can reveal all sorts of things about it that you didn’t know before.

For example, I hadn’t noticed that there was a 12v power take-off in the back of the van until I needed one to charge up my mobile. Very handy.

Another little trick the Expert has that I didn’t know about is that if you ‘plip’ open the van’s locks and then don’t touch the doors for 30 seconds, they automatically lock again.

That could save all sorts of problems if a driver accidentally ‘plips’ the keyfob while pocketing it, for example.

As can be seen by the photo, the whole contraption looked a bit Heath Robinson with various bits of string hanging off the van, but it worked a treat and we’ll be doing it all again soon.

We were a tad worried that the mattress from our bed wouldn’t fit in the back, but it slid in a treat – and the ply-lined wheelarches served as handy little bedside tables for drinks, tissues, torches and suchlike.

Even the weather behaved itself after a bad start and we both agreed that we couldn’t have chosen a better vehicle for the trip.

The Expert has made itself hugely popular among the testers at Fleet News so far.

Many of them, you understand, don’t take kindly to driving vans and only do so if they really have to – eg when they want to move something big and heavy. And because the Expert is a most unvanlike van (it is based on the 806 people carrier) even LCV haters won’t mind driving it.

They also don’t mind the fuel consumption, which is rising steadily but surely as the miles pile on.