Was this article useful?
1 person found this useful
“Audit your fleet!” screams, well, just about everyone in the industry at the moment.

Legislation could send you to jail, duty of care may see your company’s name dragged through the mud. You need to know what’s going on.

It’s enough to make any nervous fleet manager need a sit-down. But what exactly does a fleet safety audit entail?

The answer is a whole range of things, including fleet policy, the make-up of the fleet and staff well-being, as well as safety culture – in both management and drivers – and journey management.

But by far the most useful tool is a table called the Haddon Matrix. Developed by US safety expert Dr William Haddon, the matrix lists all areas of road safety that need to be considered before a crash, during it and after it.

Dave Wallington is group safety adviser for BT, which operates 44,000 vehicles in the UK.

With so many vehicles, accidents are inevitable – BT has two or three fatalities through driving every year, 300 injuries and 17,000 incidents.

Obviously, the company wanted to do everything it could to reduce these figures.

“We spent quite a lot of time over the past five years developing occupational road risk programmes,” Mr Wallington says. The firm started by conducting driver risk assessments on its drivers.

“We found there was a correlation between low risk scoring and low rates of accidents, and vice versa,” says Mr Wallington.

“That gave us confidence that we were on the right track.”

BT was determined that it should take a proactive approach to road safety.

“We wanted to anticipate where the problems occur and put resources into prevention.

“This approach of doing driver risk assessments seemed to offer that possibility.”

The main difficulty was convincing people to change the way they think about road safety.

“One of the problems with driving is that the individual is usually solely responsible for the risks they face so you have to try and change people’s attitudes, which is what we try to do,” Mr Wallington says.

“We used the Haddon Matrix to fire off ideas and make sure we covered all the bases.

“We found it very useful for putting together a paper to present to our safety champions.”

The main target area for change was in management, with the hope that changes there would filter down to the wider workforce.

“Management culture was a big area for us where we needed to change attitudes,” says Mr Wallington. “How managers behave and what’s important to them drives the way others behave.

“You have to get them on board or it’s not going to work.

“We developed a manager training course where we taught them about occupational road risk issues. We also spent time looking at our policies and procedures.

“It took us three years to get our policies formally agreed and written following the various consultation processes with different parties.”

The different parties might have lengthened the process, but Mr Wallington feels it was important to ensure that no one sector of the organisation had overall control.

“We put together a multi- disciplinary team to manage the project,” he says.

“It wasn’t something that any one person owned.

Once people began to take safety seriously, the focus narrowed to specific areas as defined by the Haddon Matrix. Journey planning was particularly important.

“We had an awful lot of drivers at risk because they were covering a lot of miles,” Mr Wallington says.

“We sat down with them and their managers and said ‘why are you doing 50,000 miles a year? Can you use other technology and reduce that mileage?’.

“That’s a free intervention, very easy and very simple. We reduce both risk and cost and promote technology that we sell.”

BT is also trialling GPS scheduling equipment which could reduce mileage by up to 45%.

The profile of drivers was also looked at, and it was found that under-25s presented the biggest risk. As a result, all apprentices now go through a driver education package as part of their apprenticeship.

Realising that company cars are driven not just by staff, BT also introduced a driver training programme for staff friends and family, which has been taken up by 3,000 people so far.

“You can have the best policies, training and assessment in the world, but if you don’t tell anyone about it, it won’t work. We run messages through every channel we can.

“If people are seeing the message all the time, they will think it’s important.

“What’s important is that the policy is in the Health and Safety handbook, not just something that’s in fleet.”

Despite the considerable progress, there is still some way to go.

“We’re still not quite there, there are still gaps,” Mr Wallington says.

“We haven’t really got there with the post-crash stuff, in particular accident investigation.

“Our focus has been on front end prevention and on getting the car back and repaired and back on the road as quickly as possible.

“But changing people’s attitudes has been the main challenge. The technical stuff is doable with time and resources, but hearts and minds is the biggest thing.”

Complying with everything in the Haddon Matrix can take time and effort and will eventually, as BT has shown, yield results. But things can be changed quickly and easily.

“Often processes are put into place before people really understand the risks.”

The Department of Transport produces a set of fleet safety benchmarks, which Dr Murray says is a good place to start.

He says: “It allows you to compare with other fleets.

“The most basic intervention there is a copy of the Highway Code,” says Dr Murray. “It’s a couple of quid a copy – there are no excuses.” 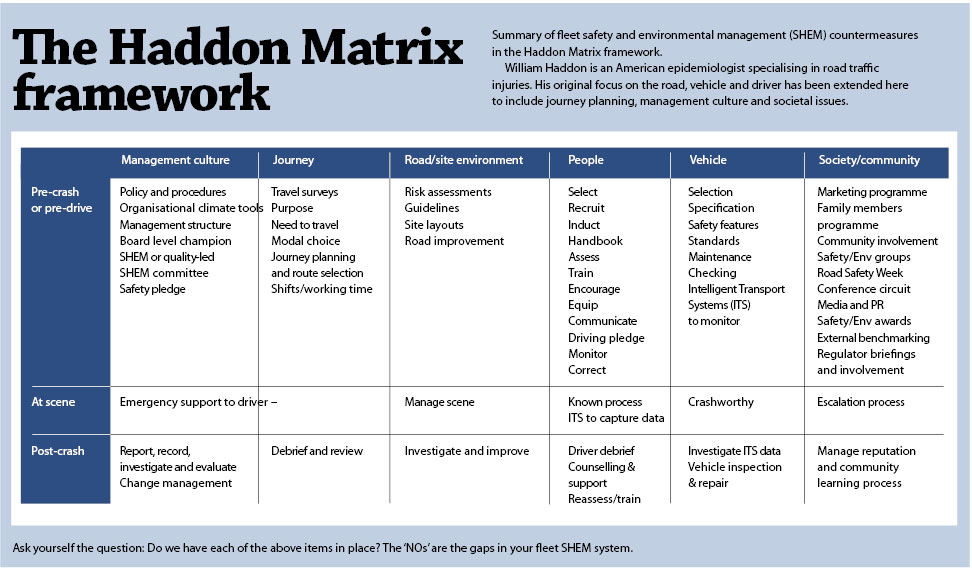