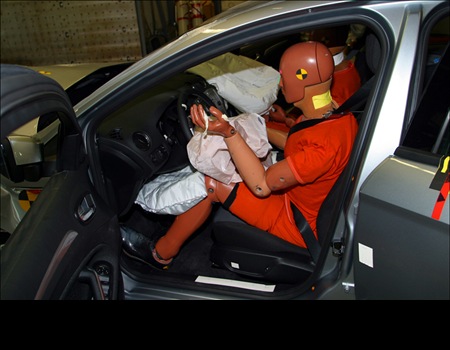 The new Ford Mondeo has been awarded the maximum five stars for adult protection in the latest round of Euro NCAP crash tests.

It also scored four for child occupant protection – but a lowly two stars for pedestrian protection.

The results of tests on four cars have been released today by Euro NCAP, including the Mondeo: the Hyunda i30, Volkswagen Caddy ‘Life’ and Volkswagen Tiguan.

On the front impact test, Euro NCAP said of the Mondeo: “The passenger compartment remained stable during the impact. The Mondeo's steering column moved forward to provide greater space to protect the driver. The driver's knees were protected by an airbag mounted beneath the steering column. The passenger was sufficiently well restrained that his knees did not contact the dashboard.”